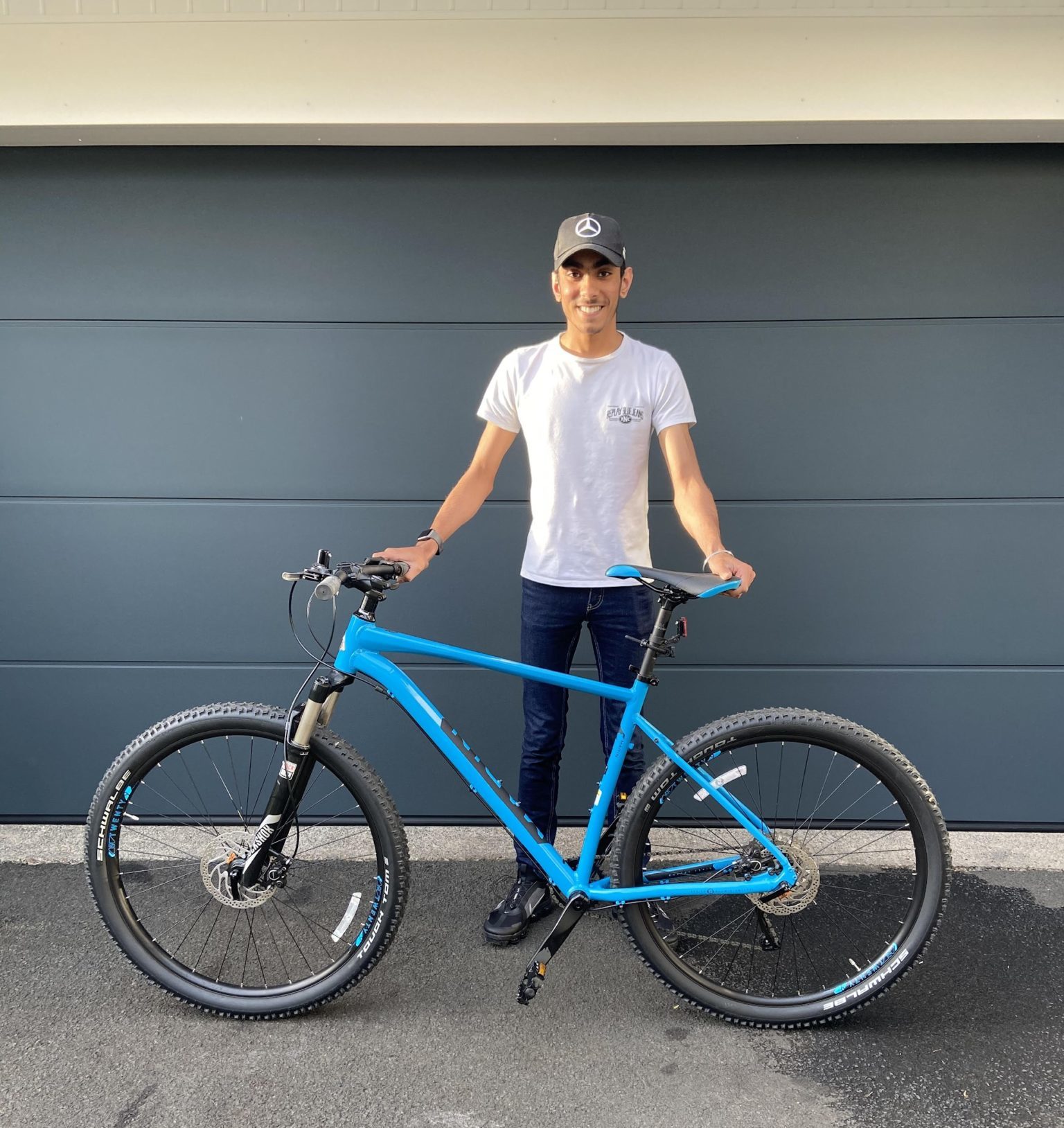 When I was in Year 11, I remember I tried to boil a kettle over the stove. This would have been a perfectly normal thing to do, had the kettle not been made out of plastic. I still remember the confusion I experienced when I started smelling incinerated low-density polypropylene (it has a very specific smell), the ensuing chaos as I attempted to extinguish the flames with a wet towel and the hysterical laughter of my friend, to whom the kettle belonged. I still haven’t paid him for the damage caused, but I guess using the “eye for an eye” principle, since just as much damage was caused to me psychologically, that basically cancels out the debt. In contrast, when Aran and Advait are my age, they will look back on the time when they raised thousands of pounds for the fight against Covid-19, inspiring our school and communities in the process. I’m just a late bloomer, I keep on telling myself.

Aran Bansal and Advait Kuravi, both Fifths, have been organising a 2.6 Challenge, a nationwide fundraiser, centred around the distance of a marathon, 26.2 miles, in light of the cancellation of the London Marathon. They are raising money for NHS Charities Together in two ways: they have organised a whole school event, where pupils are encouraged to complete an exercise linked to the number 26, like running up and down the stairs 26 times. Exercises can range from Dr Fennell’s ‘how fast can you do 26 burpees’ challenge and Mr Pavey’s 262 reps involving 10 exercises to Mr Petrie’s 26 miles run in a week or Mr Browning’s ½ ironman in under 260 minutes. My personal effort included how many episodes of Game of Thrones I could fit into 26 hours (answer: a measly 10). The noble 2.6 campaign began on Monday 4 May and will finish for most (though not all) on Friday 8 May.

In addition to this, in memory of Aran’s grandfather, who passed away as a result of Alzheimer’s and Covid-19, Aran decided to take up the 2.6 Challenge with his passion for cycling. Along with a number of other Fifths, he decided that cycling 260km in May would be an ideal challenge. I was honoured to interview Aran and Advait:

Me: First of all, how are your families coping?

Advait: It’s been difficult of course being cooped up in our own houses. My parents are doctors, it was pretty much inevitable that we would get the coronavirus, but luckily it was pretty mild in our case. Even though we have had it, we’re having it much easier than millions of others who are suffering from effects of the virus, or struggling financially from secondary ramifications. So that’s something that really encourages us throughout these events, there are millions who are suffering, but we are a bit more fortunate.

Aran: I agree that we are in an incredibly fortunate position, relatively, in the UK. And I believe that we have to take advantage of this, and use it to help those who are less fortunate than us.

Me: Can you tell us a bit about the work you’re doing, and why you decided to do this?

Aran: Unfortunately, I lost my grandfather to Covid-19 in the middle of April, and during this period, the care provided for him by the NHS staff was impeccable. Having seen the work of the NHS first hand, I decided that I should undertake a challenge to help them in some way. I considered a number of alternative fundraising ideas. However, I enjoy cycling and challenges, so after a few hours, I decided to cycle 260km in a month. I’m incredibly lucky to be surrounded by a group of Fifths, who are more than happy to sacrifice their time and energy to help support a good cause. In addition to this, I launched the whole school campaign based around the distance of the now-cancelled London Marathon. The campaign is called the King Edward’s 2.6 fundraiser and pupils and teachers alike are encouraged to participate in this event. The number 2.6 can be interpreted as 26 sit-ups per day for example or 2.6 miles. However, we also welcome creative activities centred around this number. We have set up a JustGiving page to recognise the efforts of students and staff which can be found on Firefly or any parents who would like to contribute can head to our JustGiving page.

Advait: We are firm believers that during onerous times it is vital for people to come together. If we act as a collective and foster the arguably intrinsic algorithm within human society, we can really help people who aren’t as fortunate as ourselves, whether it be with the guide dogs campaign last year, the B30 foodbank, which we did a donation event for a few months ago, or assisting the sick with the NHS.

Me: How many people have been involved so far?

Aran: So there’s a list of around 17 of us, however, really influential members of staff have been Mr Petrie and Mr Browning, who have been there every step of the way and supported us through every issue we’ve encountered. They’ve really helped us understand how best to use this experience to raise money for the NHS. In addition to this, there are 13 pitcher cyclists in our team, and although the majority of the team are in the Fifths, we have two other members in younger year groups who are actually cycling further than the 260km distance, so we’re really, really grateful for their help, but if you would like to embark on this challenge, please do email me.

Me: Have you encountered any problems or drawbacks to your project so far?

Advait: Yes, when we first embarked on the 2.6 project, we geared it towards scores and established a competitive system. What we initially forgot to realise, however, is that it’s during the Islamic period of fasting in Ramadan, and quite a few people might not be able to exert themselves too much, whilst exercise outdoors is also challenging due to social distancing restrictions. As a result, we’ve made it personal, encouraging each person to choose their individual fitness goals, and we’ve also incorporated a creative element to accommodate those who can’t do exercise. So, we want to foster a community spirit of “26”, a spirit of creativity, challenge and donating to our NHS.

Me: How is the cycling quest going along?

Aran: So absolutely everyone in our team has now started this enormous challenge and I think as a group we’re doing really well; we’re looking out for each other. I think one really big highlight that we have to mention is that Pavan Samra has raised over £1,500 on his own, so that’s helped to drag up the total to over £4,500 as we speak. Personally, I’ve covered about 70 or 80km so far and raised over £1,000, and I really hope that that figure continues to rise.

Me: What would you say to people to encourage them to pick up the 2.6 Challenge?

Advait: I say this to the whole of the KES community – the teachers, the staff and the pupils. Although the pandemic is receding, there are lives that are never going to be the same. That makes it all the more important to stay fit, stay mentally and physically healthy, and work together as a school community to help ourselves and support our society. So, why not get involved? Cycle 2.6km every day, do 26 laps of your garden or donate £2.60 it’s up to you!

Me: Do you have any more fundraising ambitions in the future?

Aran:  Yeah, well, once we’ve completed this, we hope to run another World Record attempt in June 2021. We’re aiming to set the world’s longest football match record next year, which will be 37 hours, hopefully beating the current record by an hour, and all donations will go to Alzheimer’s Society and Breast Cancer UK, because those are the two charities that are very close to us. The reason I nominated Alzheimer’s Society was that whilst my grandfather passed away from Covid-19, he had Alzheimer’s for a number of years, and watching him deteriorate was difficult, so that led us to take some action. So, hopefully, by the time we leave KES we will have raised over £20,000 in total through our various campaigns, which would be quite nice.

A huge thank you to Aran and Advait, whom I was privileged enough to interview. As things stand the total raised between both the 260km ride and the wider 2.6 campaign is £4,195 and donations continue to be welcomed throughout May. Thank you for your fundraising work, and long may it continue! 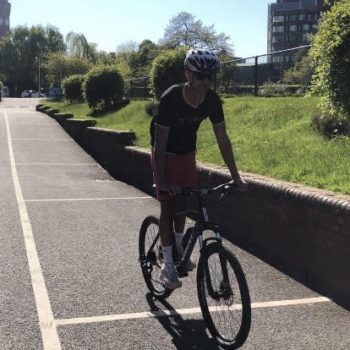 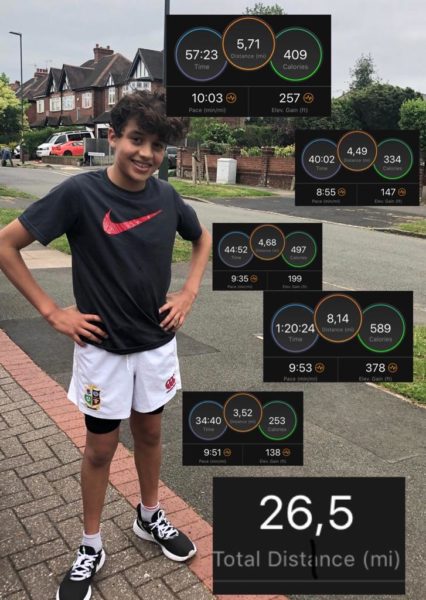