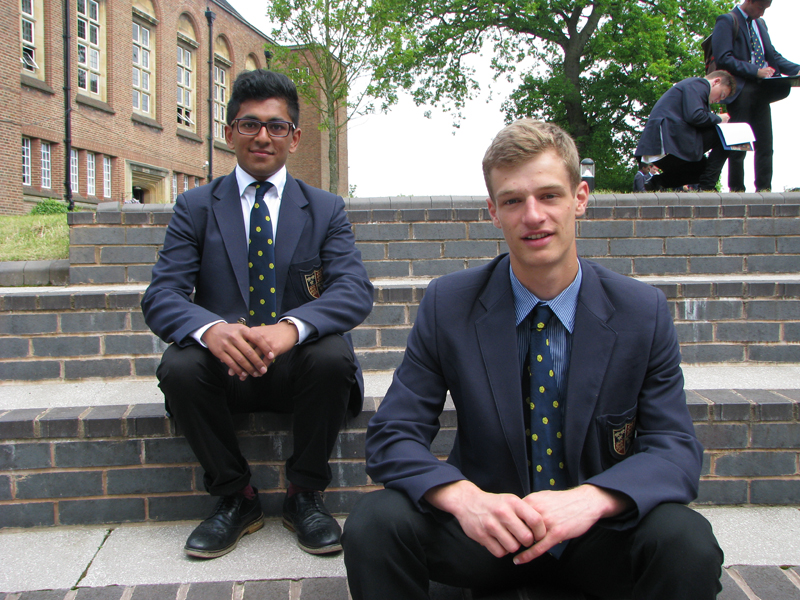 The third year of the International Baccalaureate (IB) Diploma at King Edward’s School has produced another set of outstanding results.

The maximum score of 45 points was gained by two boys, Tom Claughton and Saajan Jemahl, a score achieved by only 146 students worldwide out of over 135,000 that took the IB Diploma in 2014. Over one quarter of the cohort attained scores of 40 points or above, higher than the equivalent of four A*s at A-level.

John Claughton, Chief Master of King Edward’s School, said: “This is a remarkable achievement and I am thrilled by the performance of our boys, in only our third year of IB. For two boys to once again have achieved the top mark of 45 points and so many to have gained over 40 points is a great credit to both the boys and the teachers. These results mean that a very large proportion of our boys will be accepted by the best universities for the most demanding subjects. I am very proud of how all the boys have done, but especially my son.

“At King Edward’s we made the radical decision to replace A-levels with IB because it provides a really challenging, rigorous and broad education. As we come to the end of our fourth year of teaching IB, we can see ever more clearly the value of the education it provides. The school has always been amongst the very best academic schools in the country and now we can claim to be amongst the best IB schools.”

Tom Claughton, who is the son of the Chief Master and achieved the maximum 45 points, said: “I was very surprised and slightly shocked to get 45, particularly about my physics result! I’m really excited for next year – my main aim was to make my offer of 39 points to read French and Italian at Oxford, so I was thrilled to get 45 points.”

Saajan Jemahl, who also achieved 45 points and intends to read Medicine, said: “I was really surprised at first and I was thrilled to get 7s in Higher Level Philosophy and Standard Level Maths. I still can’t really believe it!”

In September 2010, King Edward’s replaced A-levels with the IB Diploma for its Sixth Form provision. The IB Diploma comprises six subjects within which pupils must study English, Mathematics, a science, a language and a humanities subject. Pupils also complete an extended essay on any subject, study Theory of Knowledge and undertake a range of extra-curricular activity and community service.