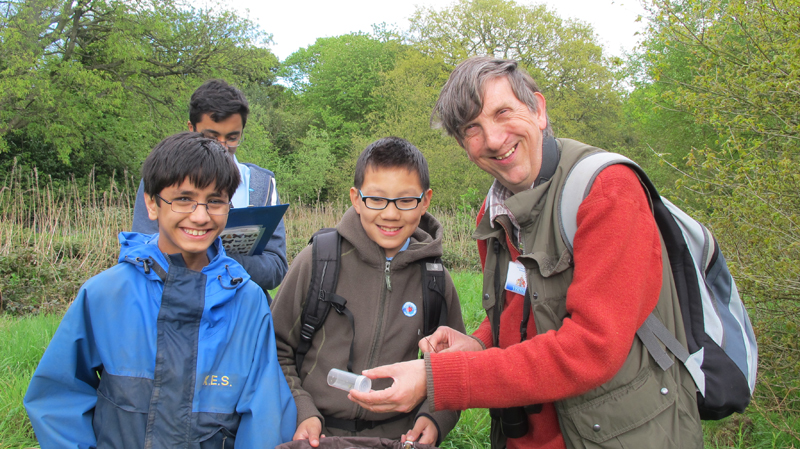 The boys compiled a list of 147 species of plants and animals living on the school site and Edgbaston Nature Reserve during the BioBlitz, which took place on Friday 9 May and Saturday 10 May.

One Year 8 pupil, Aryan Gangurde, even overcame his fear of creepy crawlies during a bug safari through the undergrowth, helped by Brett’s tales of incredible insect life cycles. Aryan said: “This is the best thing I’ve ever done. Now that I’ve seen bugs up close and understand how they live I’m no longer frightened by everything that creeps and crawls!”

Presenter of Radio 4’s Tweet of the Day, Brett Westwood, was so impressed by the aerial display provided by a group of bats and heard through sonar detectors, that he said: “I wish I’d brought the BBC sound recording crew to capture this, it’s one of the best performances I have witnessed in a long time!”

Stan Lampard, Biology Teacher at King Edward’s School, said: “The first BioBlitz held at the school was a fantastic success, partly because the weather was so kind to us in spite of the forecast, but largely due to the real enthusiasm of all the participants who were able to indulge in the huge thrill of wildlife discovery.

“The boys really enjoyed the opportunity to discover and get close to the wildlife that is on our doorstep but they may have never seen before and the findings will be used to create a wildlife record so we can monitor the diversity of life in the vicinity of the school.”