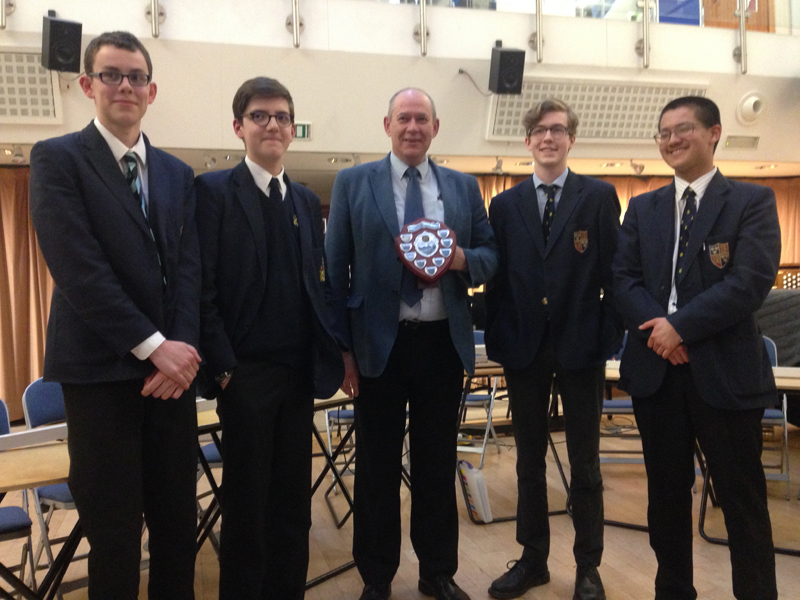 A team of four boys from King Edward’s School has returned with the Runners-Up trophy from the National Finals of the Schools’ Challenge Competition.

Over 250 schools compete in the national general knowledge tournament which follows a similar format to University Challenge. From the qualifying rounds, eight teams went through to the National Finals held at Westminster School on Sunday, 26 April 2015.

The King Edward’s School team of Yanbo Yin and Patrick Wernham in Year 13 and Alex Jarvis and Howard Kordan in Year 10 beat the host school, Westminster, in the quarter-final before defeating Abbey Grammar School from Northern Ireland in the semi-final. In the final against The Haberdashers’ Aske’s Boys’ School the team’s winning run came to an end, so they had to settle for second place and the Runners-Up trophy.

Tim Cross, Maths Teacher and coach of the team, said: “To reach the National Finals of this competition is a considerable achievement. Our boys performed heroically, and with such speed and accuracy, on an extraordinary range of topics and I am thrilled that they returned with some silverware to reward their efforts.”

John Claughton, Chief Master of King Edward’s School, said: “This school has a great tradition in Schools’ Challenge, reaching the National Finals on a regular basis for many years and several of our boys have gone on to compete in University Challenge. The two senior boys, Yanbo and Patrick, have competed with great distinction for years and this is a noble end and a due reward for them before they leave the School to go on to university this summer.”