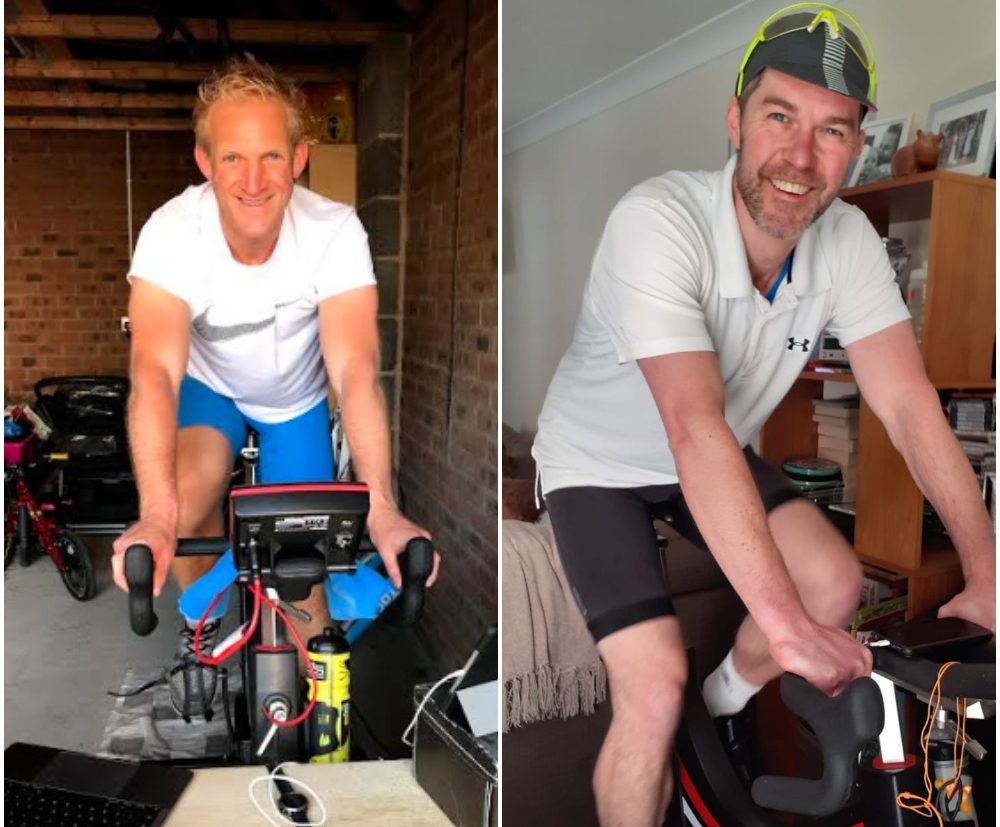 At 4pm on Friday 24 April, Mr Fair and Mr Browning embarked upon a gruelling challenge to continuously cycle for 24 hours between themselves, in an attempt to raise funds for the NHS. The pair rode on static bikes in their homes, in two-hour alternating shifts and in total rode 756km, having raised £2,125 so far in the process.

This challenge was the brainchild of Mr Fair, Head of Heath House, geography teacher and former Olympic athlete (in descending order of importance). As one of King Edward’s School’s top-tier cyclists he wanted to “raise morale in the community” at such a difficult time. However, he was still left with the task of picking the right partner to aid him in this colossal cycling challenge and after allegedly being rebuffed by numerous teachers, he decided to settle with Mr Browning, since, “No one else would do it.” Despite the fact Mr Browning is not known among the KES community as being a prolific cyclist, the Director of Rugby has formed a reputation for being a great endurance athlete with races such as the Marathon des Sables under his belt, so he saw this opportunity as both, “a great way to test [his] limits… [and to] help our frontline services during the challenges they currently face at this difficult time.”

Below is a short interview with Mr Fair and Mr Browning following their completion of the challenge.

What motivated you both to keep going throughout the challenge?

GB: Mr Fair did the first shift so he was always two hours ahead of me… I couldn’t stop and let the side down! Also, there was a target of achieving 750km in 24 hours and that meant we had to up the pace in the last two hour stint each. We managed it with about 10 minutes to spare in the end.

JF: The motivation of doing a challenge with someone is key, as the thought of letting that person down by stopping would have been pretty tough to explain. As soon as the clock started there was no other choice apart from completing it, although I had to pick up my pace a little for the last spell so we could get 750km done.

Were there ever any points in which you were close to stopping and giving up? And if so, how did you motivate yourselves to fight past that voice in your head?

GB: It was pretty tough through the night. My under-carriage was pretty sore after six hours and the thought of more was daunting but I put the headphones in and listened to some rave classics in the 2-4am slot which helped!

JF: The worst I felt was after the 8-10pm shift when I just needed to crash out for 20 minutes, which was a worry at the time as it was quite early on in the challenge. Luckily, former KES teacher, Mr Irvine, joined me in a Zoom meeting for the 12-2am slot. He got on his bike in his garage and we chatted and cycled for the full two hours which made the time pass pretty quick.

Did you find this to be more of a physical challenge or a mental challenge?

GB: It was tough physically but even more difficult mentally. Alone in your garage is quite a lonely place. The ‘normal’ motivation of a journey wasn’t there for me so it was more a question of being motivated by the stats and, as ever, by the thought of telling people you had to give up! My daughter had painted a rainbow with ‘NHS’ under it on the driveway which I stared at for the whole time. Our 24 hours of discomfort is nothing compared to what our frontline staff are doing for weeks at a time.

JF: Definitely a mental challenge, you could always keep the legs spinning but between 50 to 80 minutes in the shift, the time would tick so slowly, especially when you were on your own. I had to tell myself to stop checking the time as I would be looking nearly every minute.

Are there any more ‘physical challenge’ plans in the pipeline to help raise more money for the NHS and the Cot Fund charities?

GB: I am always keen to find a new challenge. I try to do one thing a month that I’ve never done before… So if anyone has any ideas for May, I would be very pleased to listen?!

JF: I would be keen to join in something if someone else from KES feels inspired to set up another challenge.

If anyone has any ideas for potential challenges for the KES community to take part in, please let it be known by emailing teachers that may be interested. To hear more information about the challenges, make sure to follow KES Sport’s social media pages on Instagram, Twitter, or Strava (search under ‘Clubs’ for ‘KES Birmingham Sport’). Furthermore, donations to the KES 24 hour cycle challenge are still being accepted via JustGiving.