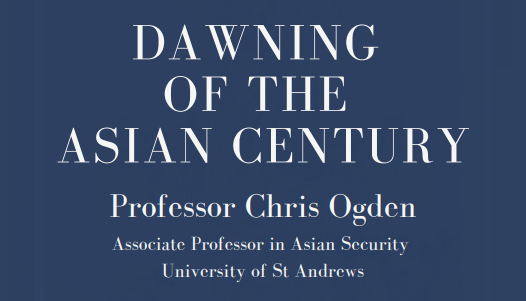 On Wednesday 27 January, we were very lucky to have Professor Chris Ogden, an Old Edwardian, return to KES to give a talk as part of the Speaker Series.

Now an Associate Professor in International Relations at St Andrew’s University in Edinburgh, Professor Ogden is a world expert in the field of Asian Securities and the relations between the countries in that area. He came to talk about ‘The Dawning of the Asian Century’: the return of China and India to political and economic prominence in the world. He presented the growth of the two as a natural rebound from the colonisation and subsequent instability of both, sharing data analyses that showed the relative positions of each throughout history and how we have now reached the ‘point of no return’, whereby it is certain that they will again overtake the West.

The highlight of the talk, however, was the questions after it finished. As an audience, we gained insight into the priorities of the two, the risk of a conflict between them and what looks likely to be the best course of action for the West in response. It was an invaluable experience for anyone with an interest in politics, current affairs or economics. All the speakers in the series are curated by members of the KES student body.