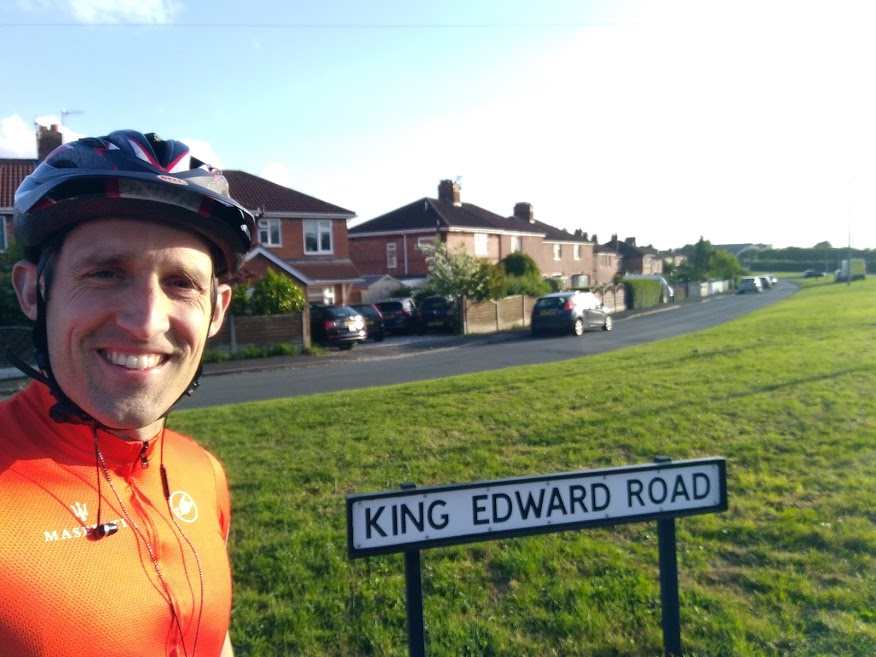 Eight weeks of glorious sunshine and not much to-ing and fro-ing stretch before us. What better time than to learn to sustain ourselves more… sustainably? Let’s use these mellowest of holidays to learn, then measure, then reduce and then inspire others to do the same – to build back better for a brighter emergence from lockdown.

Let’s start by taking another look in on our pupils’ carbon habits. Last week saw RemD calculating their mean yearly tonnage of CO2 at 12.7. What about Shells and UMs? Ten random Shells had about the same – 12.9 tonnes CO2 per year – but that’s a small data set, possibly skewed by one frequent flyer. Take him out, and it’s 11.7 – still higher than the average British adult. UMB come out at 11.1, with frequent walkers Ali and Roshan an admirable 8 – but that’s still more than four times the global average. Is that fair?

Commute-wise, a third of these Shells and UMs come to school by car, and most of those drivers come only two miles or less – just a 20 minute stroll. Why? Sports kit and musical instruments are an issue for some, so bigger lockers for cyclists at school could turn these drivers into walkers overnight and save a tonne of CO2 per pupil on average per year.

The one hour 10 mile cyclable radius around KES

I thought I should practise what I preach and try to cycle to Hereford to see my in-laws instead of driving (one hour) or taking the train (four hours on a Sunday!) I only got as far as Droitwich because I ran out of mobile data and got lost, but I did serendipitously pass this road (see top image) in Bromsgrove, exactly 10 miles or one hour from KES. This made me wonder – see the map above: if it takes 60 minutes of not very fast cycling and getting lost to get within a 10 mile radius of KES, how far away from school could you live and still want to bike in? An electric bike, costing a year’s worth of commute petrol, might halve that time. Last year, I remember NLM and KDP cycling in 16 miles from Wolverhampton… Anything is possible. 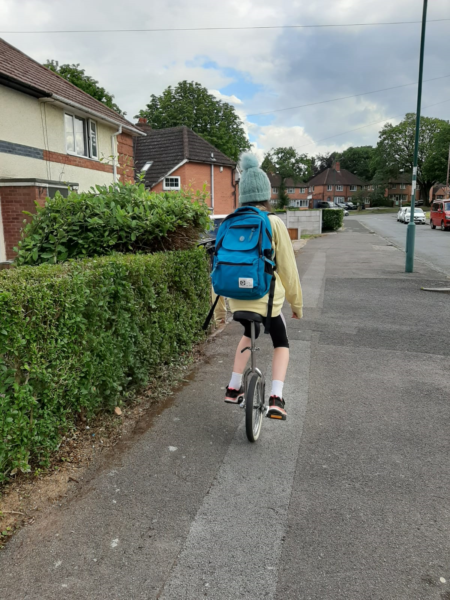 When four wheels, or even two is just too boring… This is my friend’s daughter, in Year 9. She is the only person I know who has regularly commuted to school by unicycle. I asked her parents’ permission to interview her as in inspiration to us all. Here’s what she said:

“It started with stilt walking, then I thought what next? My parents said “Are you sure?!” and I said “Yeah,” and they said “Go for it!” My friends were confused at first, but it’s a conversation starter. I met two people in the park and they had a go. I had a few funny comments. I remember one time a lady in her car just stopped and clapped.

“It takes about 40 minutes. It’s quicker than walking, but slower than cycling. The most fun thing? It’s different. And there are lots of little challenges: how to idle in one place, jumping, curb-hops. The hardest thing? Learning to get on without holding on to anything.

“I’d prefer to unicycle than be driven. It’s fun and relaxing, and better for the environment, and I get some exercise. Your balance improves a lot. The dangers? Unicycling is slow – you don’t really hurt yourself. My advice would be to try to find something you enjoy.”

She did the interview, of course, whilst on the unicycle.

I wonder – how many times has a stranger stopped to clap the way you commute?

The great cycling versus driving debate continues in the Rems…

Rem:     And I’d rather live next to a busy cycle-path than a busy road.

Rem:     I could learn. But I’d still feel vulnerable on a bike.

Rem2:  Actually, you’re more likely to die or be injured in a car – you’re going faster, surrounded by glass, metal and other bodies also going fast, and surrounded by other cars in a rush, breathing toxic fumes straight off the road. And you’re much more likely to kill me on my bike if you’re in a car. And cycling is better exercise.

Be part of the solution, not the problem.

“I didn’t realise there are so many experiences to be had from walking.”

Wherever possible, let’s use lockdown to get ready to safely walk or cycle to school from this September.