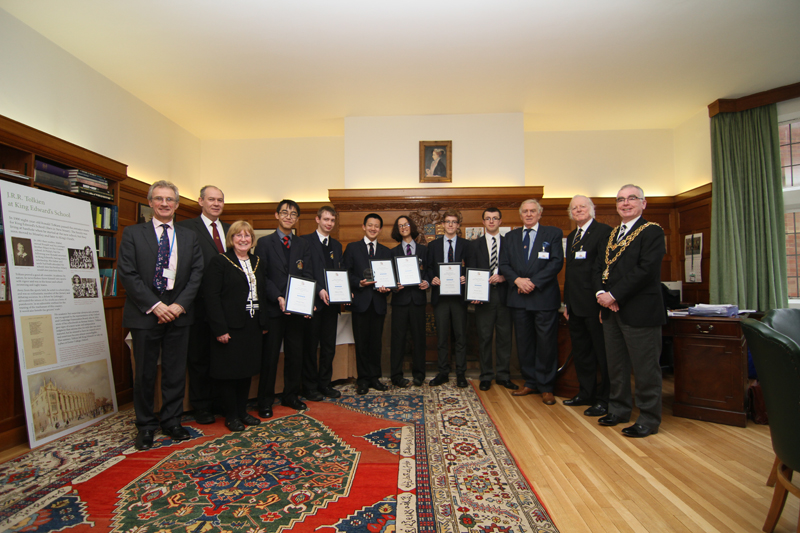 The Lord Mayor of Birmingham presented the Shaun Lyttle trophy, the prize for the Lord Mayor’s Annual Sixth Form Mega-Quiz, to a team of boys from King Edward’s School, Birmingham on Thursday, 6 February 2014.

The boys in the winning team, named the KEStrels, were presented with a trophy and each given a certificate by the Lord Mayor, Councillor Mike Leddy, before enjoying an informal chat over tea and cake.

50 teams from across the West Midlands took part in the Mega-Quiz, which was held at the University of Birmingham before Christmas. The teams competed in 10 rounds of questions in the quiz hosted by celebrity quiz-master, Mark ‘The Beast’ Labbett from ITV’s The Chase.

John Claughton, Chief Master of King Edward’s School, said: “It is a great honour to welcome the Lord Mayor to the school to present the prize for this prestigious competition.

“The boys have done very well to win this close fought competition and certainly enjoyed the opportunity to meet the Lord Mayor. As the majority of boys are in Year 12 they will be able to defend their title in the 2014 Mega-Quiz. Several of the boys in the team compete in national Maths and general knowledge competitions so they are already seasoned veterans.”

The KEStrels team is made up of Yanbo Yin (captain), Clement Chan, Jonathan Gorard, Harrison Green and Patrick Wernham in Year 12 and Richard Miller in Year 13.