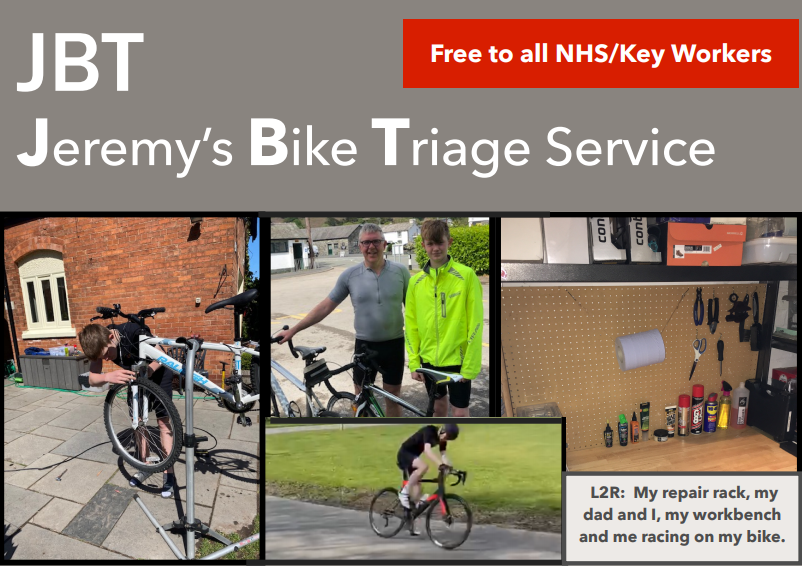 Jeremy Maclean, one of our students at KES, has started up a service (on his own initiative) to repair and clean up bikes during the lockdown.

Given the recent warnings to avoid buses and trains, and more free time while people stay at home, cycling has become an increasingly popular means of transport and exercise. On top of this, the transport secretary this week pledged £2 billion to double the number of pedestrians and cyclists, so by 2025 we could see many more bike routes opening up around the city and riding a bike to work becoming increasingly common. Thanks to this, Jeremy’s service could not have come at a more opportune time, particularly as people need the means to pass the time in isolation while keeping healthy.

The bike triage and cleaning started out with a small favour to a family friend. Jeremy has gone on two school cycle tours (in southern Germany and the low countries) and cycles a lot in his own time, from which experiences he has gained a lot of knowledge about bike maintenance and construction. So a friend asked him to look over a bike and clean it – initially for free, as it only took a little time. Due to the success he had with the first bike, he was asked to look over three more and realised that there was a growing demand and market for bike repairs as the time we spend socially distancing goes on. As such, Jeremy and his family looked into the costs of the service offered at a standard shop, which didn’t seem to match the amount of time and effort that was required for the repairs he had done, and decided to begin a service of their own – although he does fully encourage people to use their local bike shop if possible.

So, on 11 May, he sent out a flyer to the local WhatsApp group, advertising to members of his road. This then started to be spread among the wider community, until it made its way over to the KES newsletter. He offers a variety of services, which vary from £3-12, including: a thorough clean of the bike, degrease, general check over, and jet wash. The bikes can have one of two levels of triage, and he offers to order in parts and fit them if necessary. The charge is per service, rather than time spent on each individual bike, as that has varied for him depending on the needs of each customer.

With the money he’s making, Jeremy is donating £2 of every transaction to his chosen charity, which is Birmingham Children’s Hospital. In addition, as extra thanks to those working on the frontline, the service he is providing is free to all key workers during this period of lockdown. The extra money is going towards his savings for a school trip. As of this moment, he has completed servicing 10 bikes, but has plenty remaining to do. This kind of entrepreneurial mentality is certainly one we could adopt, especially with its dedication to aiding those essential workers who put themselves at risk, daily, in the name of public health.