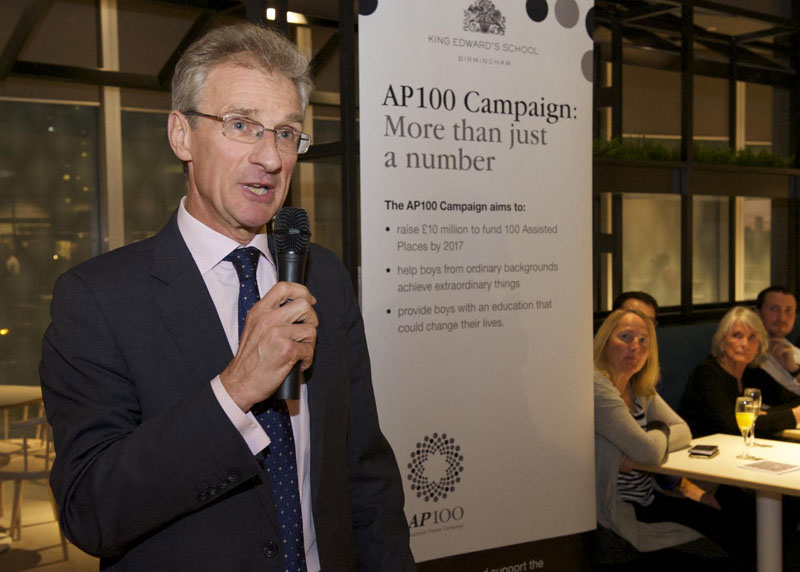 King Edward’s School, Birmingham, one of the oldest institutions in the city, has held an event at the newly-opened John Lewis in Grand Central to raise awareness of its Assisted Places 100 (AP100) Campaign.

Over 300 guests of staff, former pupils and parents, attended the event held in the store’s restaurant, The Place to Eat, on Tuesday 3 November 2015. The purpose of the evening was to raise awareness among the school community of its AP100 Campaign, which aims to raise £10m to fund 100 Assisted Places in the school by summer 2016.

The school’s strongest connection to John Lewis is through its Managing Director, Andy Street, who is a former pupil and an ambassador for the AP100 Campaign. However, there is a much longer connection in that King Edward’s School, one of the oldest institutions in the city, used to own the land on which Grand Central is built.

The purpose of King Edward’s School has always been to provide an outstanding education for able boys, whatever their background, so the AP100 Campaign is critical to that purpose. The Campaign has already raised £8.7m from alumni, former and current parents, and other organisations, so the school is well on the way to reaching its £10m target.

John Claughton, Chief Master, said: “John Lewis in general and Andy Street in particular have been very generous in allowing the school to be the first ever out-of-hours event and all of the guests had a wonderful evening in this remarkable new shop. However, the event also enabled us to thank the many people who have contributed to the AP100 Campaign.

“King Edward’s School is a great school, one of the great schools of this country, and we are doing all we can to ensure that such a wonderful school is open to all boys of ability. We are proud of the fact that we are now the most socially and ethnically diverse independent school in this country and this Campaign has made that possible. If we can produce more boys of the character and ability of Andy Street, we will be doing our bit for the future prosperity of this city.”

Guests at the event enjoyed a drinks and canapé reception prior to an exclusive private shopping experience for an hour after the store’s official closing time.