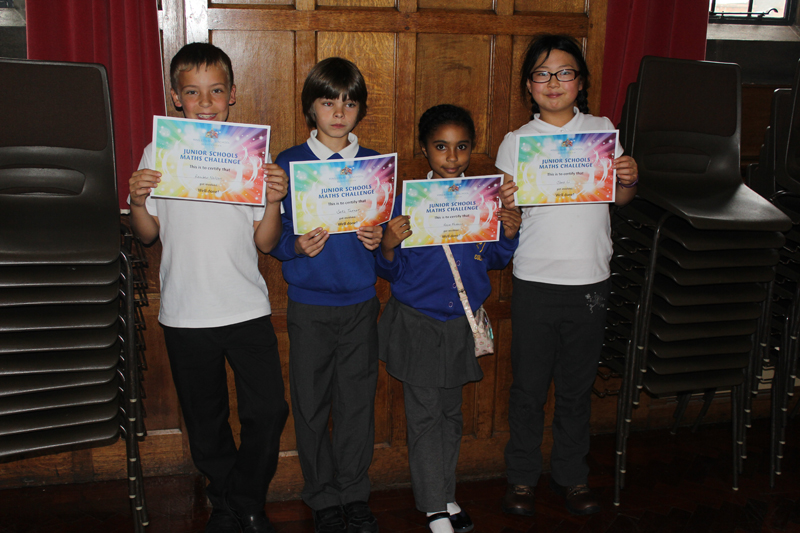 Ten primary schools from Birmingham and beyond are through to the final of a city-wide maths competition organised by five boys from King Edward’s School, Birmingham.

Almost 50 state primary schools entered teams of Year 6 pupils into the competition which is designed to stretch their abilities whilst having fun. The top 10 teams will now compete in the final on Friday, 12 December 2014.

Tony Bradshaw, Head of School at Colmore School in Kings Heath, which is competing on Friday, said: “Our pupils loved coming to King Edward’s School for the heat in September, and were really thrilled to qualify for the final. They have been sharpening their pencils and their wits in preparation for Friday: we’re ready for anything to be thrown at us.”

Vidy Reddy, Jeremy Ho and Suhayl Fazal in Year 12 and Johnny Allen and Kiri Koumi in Year 13 at King Edward’s have written the questions for the competing primary school children, which include a cross-number and maths relay races.

Jeremy Ho, one of the boys organising the competition, said: “We’ve loved seeing all the children coming to our school to compete in the heats. They have so much energy and enthusiasm for mathematics!”

Tom Arbuthnott, Director of Outreach at King Edward’s School, said: “It’s wonderful to see so many schools taking part in this activity and I know that their pupils – and ours – have benefited from the extra stretch and challenge provided by it. We’re looking forward to finding out which team will be the overall winner.

“Through sharing our resources, our teachers and our facilities with primary schools, we can help challenge their brightest children. By organising competitions like this, and through the outreach programme in general, we are showing how independent schools can make a constructive difference in their local communities and work with lots of schools to raise aspirations.”

State-funded primary schools from across the West Midlands have taken part in the competition, ranging from Walsall to Moseley, and Sutton Coldfield to Kings Heath. There will be another maths competition for Year 4 pupils starting in January 2015.

King Edward’s School has a vibrant outreach programme which the Primary Schools Maths competition forms part of. Each year the school runs over 120 master classes, engaging with 10,700 primary school children in over 140 schools.