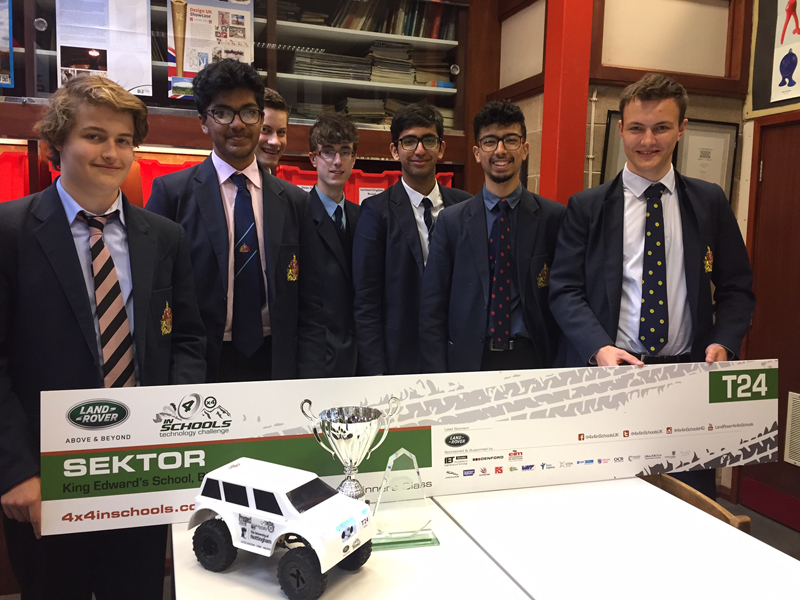 A team of Sixth Form boys has claimed the runners-up spot in a national competition run by Land Rover to design and build a radio-controlled 4×4 vehicle.

After impressing the judges at the regional stage of the Land Rover 4×4 in Schools Technology Challenge, the team competed in the Beginner Class of the National Final held at Silverstone on Tuesday, 28 March 2017.

On top of finishing runners-up, the team comprising George Laight, Mustafa Lone, Daniel Marris, Jack Thompson, Kunal Dalal, Philip Edwards and Shonak Joshi, all in Year 12, also received the Judge’s Recommendation Award for the use of electronics in their design.

Phil Balkham, Head of Design and Technology, said: “This is the first time the School has taken part in the competition, so for the boys to do so well is an incredible achievement and really highlights their potential for future engineering careers.

“A number of former pupils have gone on to enjoy successful careers as engineers in the automotive industry, some at Land Rover itself, and a very recent former pupil has even joined Ferrari’s F1 team. I’m sure this success will inspire our boys to seriously consider engineering as an option.”

The Land Rover 4×4 in Schools Technology Challenge involves teams developing a 4×4 vehicle to set specifications, which must be able to negotiate a specially designed test track in the same way as a full-scale 4×4 vehicle. The Challenge aims to give young people an insight into what it takes to become an engineer through practical hands-on experience.