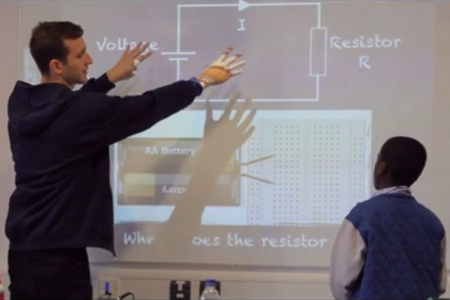 Pupils from King Edward’s School and King Edward VI High School for Girls took part in a special weekend of activities to help prepare them for the future.

Just before the start of the academic year, pupils in Years 8 to 11 took part in a special educational experience run by two former pupils of King Edward’s School to improve their confidence and communication skills and develop their knowledge of technology.

The course was delivered by brothers, Ash and Sunny Sangha, who after King Edward’s went to Oxford and Cambridge University respectively. Since 2011, the brothers have been mentoring young people and recently founded 225 Academy, which provides a unique learning experience to equip young people with the skills they need to succeed in the 21st Century.

Sunny Sangha, said: “As Director of Learning at 225 Academy, I take great pride in encouraging young people to realise that their potential is unlimited. The world is changing at an unprecedented pace and it is vitally important that we prepare young people to take full advantage of the incredible opportunities that await them in the 21st Century.

“We are proud of the transformative impact we have on the young people we work with and are excited to bring our inspirational mentors from around the world to Birmingham.”

Ash, Director of Partnerships at 225 Academy, said: “I spend a lot of time meeting with parents, education leaders and young people in Asia and the Middle East which is the focus of much of our company activity.

“However, my brother and I are proud to have grown up in Birmingham and we wanted to give something back to our hometown. This is something we want to offer for free every year from now on in Birmingham and next year we plan to open the Academy up to even more young people from across the city, regardless of their background.”

John Claughton, Chief Master, said: “Ashvir and Sunny Sangha are two exceptional young men and their Academy and this course show what such talent can achieve.

“Next year, they intend to run a similar course here for more students and for longer and I believe that this could have real value for the young people of Birmingham. And this is only part of what King Edward’s School, with its great academic success and strong alumni community, can do for the City.”