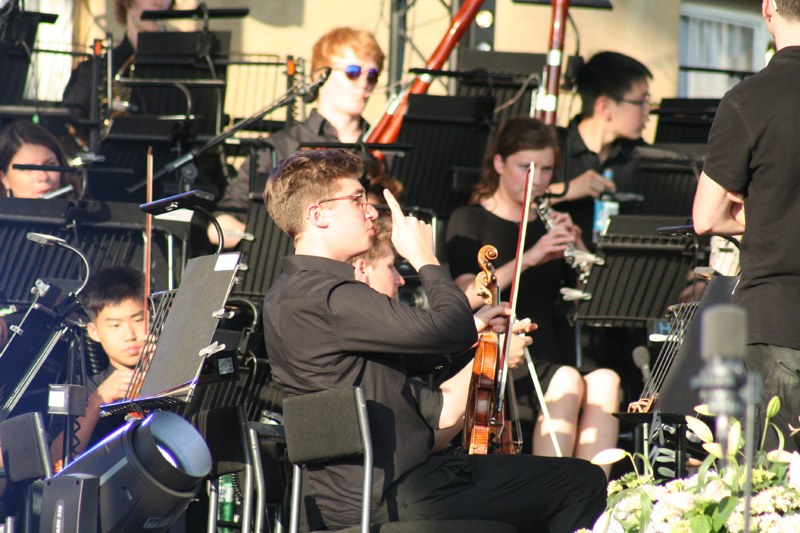 A talented young musician from King Edward’s School, Birmingham, had the honour of playing for Her Majesty The Queen last week.

Roberto Ruisi, a Year 12 pupil from King Edward’s School, is the current leader of the National Youth Orchestra (NYO) and played as part of a select group of musicians from the NYO at the Coronation Festival last weekend.

The gala concerts, which took place in the Gardens of Buckingham Palace from the 11thto 13th of July, celebrated the last 60 years of performing arts since HM The Queen’s Coronation. Artists from the UK and around the Commonwealth took part including Katherine Jenkins, Russell Watson and Katie Melua.

This is the second time in the last twelve months that Robbie has met HM The Queen, as in December he collected the Queen’s Medal for Music on behalf of the NYO.

On playing for HM The Queen at the Royal Preview, Robbie said: “I’ve been a part of some incredible projects in the past, but this one is right up there. I felt absolutely compelled by the vast nature of the event and it’ll be impossible to forget.”

John Claughton, Chief Master of King Edward’s School, said: “Robbie is a truly remarkable young man. He has now been the leader of the NYO for two years and he is destined to be the leader for a third year, a unique achievement.

“We are very fortunate to have three pupils in the NYO at the moment, but Robbie is undoubtedly the finest violinist we have had here in a generation. His presence here has enriched school life for everyone and he has richly deserved these accolades.”