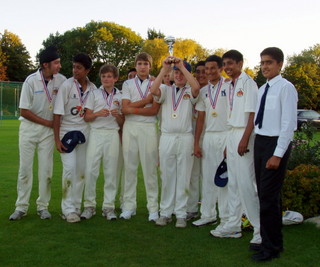 Batting first in the 30-over match on one of the best days of the summer, King Edward’s posted a challenging score of 169-7; the star was Tarush Gupta with 102, his first ever century.

King Henry’s started carefully and built a good foundation; drinks were taken after 16 overs and Henry’s started to raise the scoring rate. However, three quick wickets, including two run-outs, put KES back in charge. One run-out was the result of a direct throw from Josh Ray. Henry’s fell well behind the required run rate and lost further wickets.With 5 overs to go, they needed 50 runs. At this point, the Coventry captain, Charlie Adams, hit 33 in two overs and suddenly a victory for the visitors was on the cards.

However, KES kept their nerves and Henry’s lost wickets through another run-out and a good catch. It came down to the last over with Henry’s needing 6 for victory with two wickets left. No runs came from the first two balls, off the third ball there was a run-out going for the second run. Adams still had the strike but was bowled by KES captain, Josh Dowdeswell, bravely taking the last over, leaving KES the victors by 4 runs.

KES have won this competition for 3 of the last 5 years.