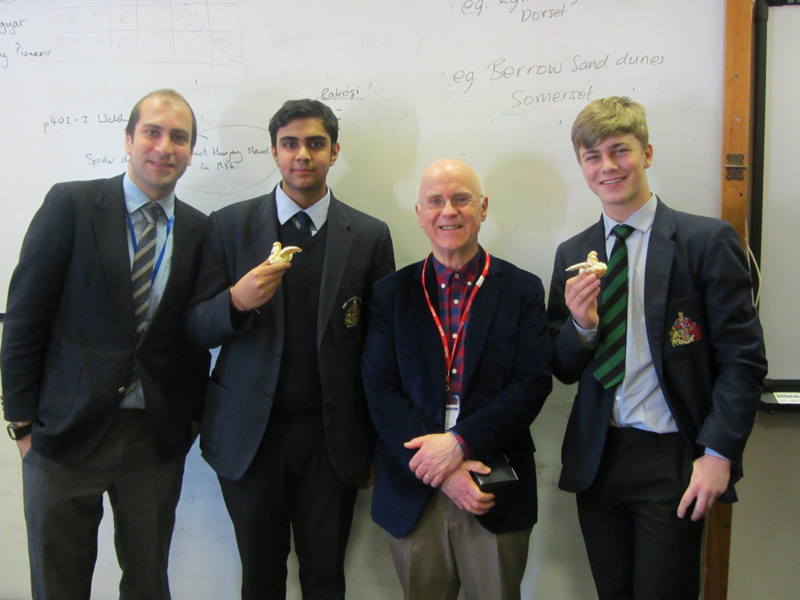 Boys at King Edward’s have been learning about baking from 2012 Great British Bake Off finalist, Brendan Lynch.

The talk by Brendan, which was organised by two boys in the School’s Cookery Society, was attended by over 20 pupils on Tuesday, 3 March 2015. Brendan talked about his experiences on the popular BBC cookery show, the different ingredients that he uses and the problems with modern hybridised wheat, and where his passion for baking began.

Brendan, who is a self-taught baker and runs baking sessions in retirement homes and the local community, said: “I really want to encourage this particular age group, if I can, because I believe it’s such an essential skill to have. We must go back to cooking and baking and stop outsourcing our health to the corporates. So let’s get back into the kitchen and start talking, and tasting and enjoying again!”

Brendan was the first guest speaker for the Cookery Society, which was set-up by Year 12 pupils Shiv Sarna and Chris Dillon in September 2014. Shiv, said: “We were extremely privileged to have Brendan as a guest speaker in our society, and we were delighted to have the opportunity to listen to his engaging tales.”

Chris continued: “Most of the people my age have no idea the difference it makes just when you slightly alter the foods you eat. It can be something as simple as switching from eating white rice to brown that might make you feel much more energetic and healthy, and I really want people to start appreciating this.”

Dr John Fennell, Teacher of Chemistry and supervisor of the Society, said: “The boys have shown great enthusiasm and drive in setting-up this Society and securing such a fantastic speaker. It’s important that young people learn about what is in the convenience food that they are eating and how to create their own healthy alternatives, so it’s really encouraging that a number of boys are already participating in this new Society.”