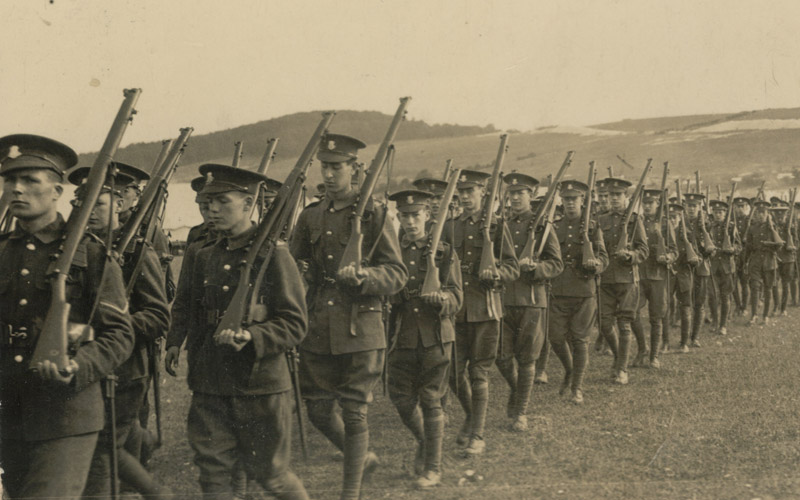 An exhibition commemorating the service and sacrifice of former pupils of King Edward’s School, Birmingham will also seek to remember its forgotten casualties of the First World War.

The third and final phase of the ‘King Edward’s School and the Great War’ exhibition, which will open on Tuesday, 6 November 2018 in the school’s memorial chapel, will centre on the school’s roll of honour.

Images of those who served and died in the war will be projected into archways inside the chapel. A drift of poppies will rise up to the bronze memorial plaques, which list the names of 245 of the school’s former pupils who died in the conflict, and a ceramic poppy installation will include a poppy for each of those names.

The school’s Tolkien Lecture will take place on the same evening with a talk on shell shock given by Professor Sir Simon Wessely, Regius Professor of Psychiatry at King’s College London. This will be preceded by the first showing of a film, produced by two former pupils, which will tell the story of one of the forgotten casualties of the war, Captain John Osborn Walford.

At the age of 45, Captain Walford joined up at the outbreak of war and he became a decorated war hero. He survived Fromelles and Passchendaele, and was in almost constant action until the end of the war. Although Captain Walford survived the war, he struggled to deal with its after-effects and ultimately succumbed to what would now be recognised as post-traumatic stress disorder, taking his own life in 1922. As a result, his name does not appear on any war memorial.

The story of Captain Walford was only uncovered when his medals, including a Military Cross and Bar, were found by his granddaughter less than a decade ago. The family had never spoken about Captain Walford because of the stigma of suicide nearly 100 years ago.

Keith Phillips, Acting Chief Master, said: “The research undertaken by the Foundation Archivist, Alison Wheatley, prior to and during the centenary commemorations has brought to light a number of poignant and little known stories about our former pupils who served and lost their lives in the First World War. The three exhibitions held by the school have provided the opportunity for us to tell some of these stories and this final exhibition highlights the fact that for some the war did not end at the Armistice.

“Over 1,400 boys from King Edward’s School fought in the conflict and at least 245 of them never came back. Research for the commemorations has identified 17 former pupils killed as a consequence of the First World War who are missing from our memorial plaques. When the exhibition ends next year, it is only right that we honour these fallen on an additional plaque in the memorial chapel to remember the sacrifice made by all of our alumni. Nevertheless, it is unlikely that the true number of losses suffered by this school and this city will ever be fully known.”

The exhibition will be open to the public on Friday afternoons and is free to attend but visitors must register in advance.

Find out more about the exhibition and book to attend.