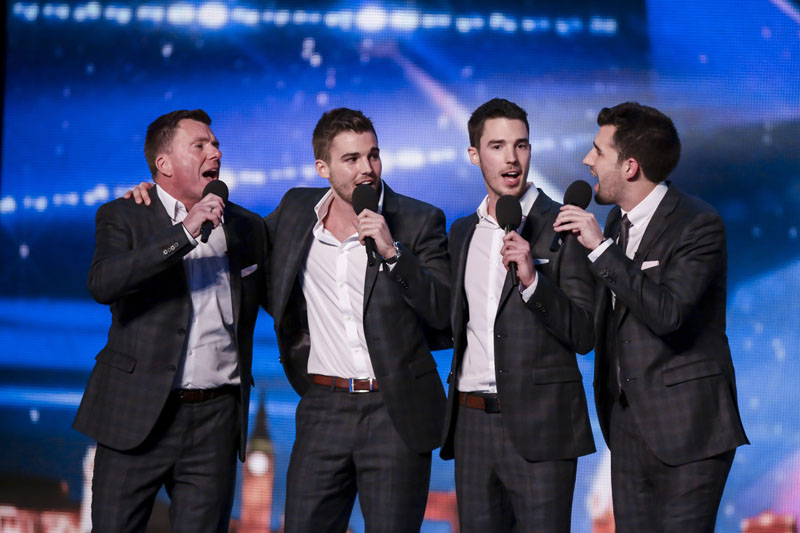 Three brothers and former pupils of King Edward’s School, Birmingham and their father have won over the judges on Britain’s Got Talent with their vocal harmony group, The Neales.

The Neales impressed the nation with their vocal harmonies and family bond as they received a standing ovation from the crowd, and “four big fat yes'” from the celebrity judging panel on the programme which aired on Saturday, 2 May 2015.

Brothers James (class of ’04), Dan (class of ’07) and Phil (class of ’08) joined their father, Laurie, to become The Neales to help Laurie realise a lifelong ambition of being a singer. Outside of the TV show, James is a lawyer, Dan works for a bank and Phil works in marketing and has recently also set up his own business.

On balancing their careers with one of Britain’s biggest TV shows, Phil said: “For us, this genuinely is a once in a life-time opportunity – and one we want to take more than anything!

“At King Edward’s School we learnt how to balance studies with sport, Friday afternoon activities, school plays and a healthy social life! We’ve always believed in working hard to be the best you can possibly be, and we’re loving this experience together. Long may it last!”

During their time at King Edward’s, the Neale brothers were better known for their sporting achievements, with James, Dan and Phil playing together in the 1st XI cricket team despite Phil only being aged 13 at the time. Dan and Phil both went on to captain the side in consecutive years.

John Claughton, Chief Master of King Edward’s School, said: “Perhaps what this school taught them most of all was courage because you have to be very brave to stand up there and perform as a family. I remember Phil on stage in school plays and all the boys were full of character and energy, but their real talent at school was cricket. As for Laurie, he was a proud father when his boys were here, but that can’t be anything like what he feels now.”

The Neales’ popularity is evident with their first audition having already received over two million views on YouTube. This Saturday at 8pm on ITV 1, the public will find out if The Neales are through to the live semi-finals which begin next week.

Best of luck for Saturday to The Neales!

Pictured: The Neales performing on Britain’s Got Talent (from left to right: Laurie, Phil, Dan and James Neale). Image courtesy of ITV.