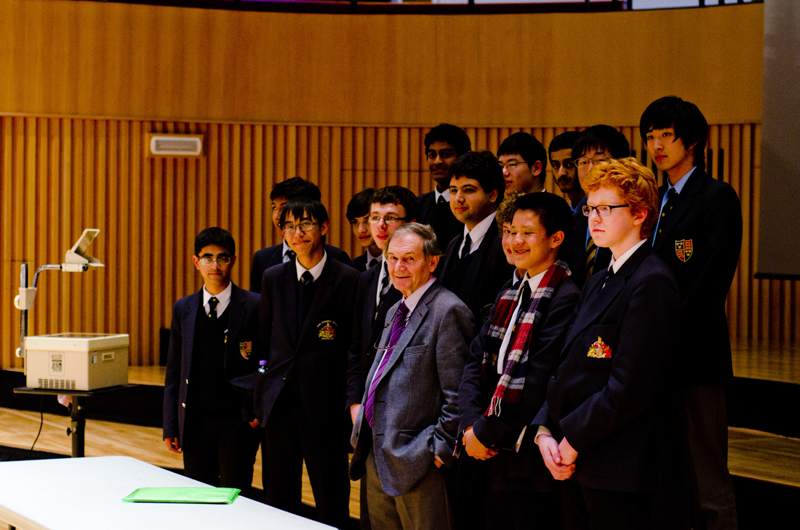 Two of this country’s leading mathematicians presented their exciting new findings at an event in the Ruddock Hall on Wednesday, 26 September 2012 as part of the London Mathematical Society’s Popular Lectures.

Sir Roger Penrose FRS, Professor of Mathematics at the University of Oxford, talked On Attempting to Model the Mathematical Mind and reported on recent experiments which point to new insights into brain activity.

A talk on whether a computer can be programmed to do maths at least as well as humans, titled Can anything be salvaged from the wreckage of Hilbert’s Dream?, was given by Sir Tim Gowers FRS, Royal Society Research Professor in the Department of Pure Mathematics and Mathematical Statistics at the University of Cambridge.

John Claughton, Chief Master, said: “It is a great honour to welcome to the school such eminent mathematicians and it is a wonderful use of the 400-seater auditorium in the Sir Paul and Lady Ruddock Performing Arts Centre, which was opened in April this year.

“King Edward’s School has a very rich mathematical and scientific tradition with two Nobel Prize Winners, Maurice Wilkins and Sir John Vane, and one winner of the Fields Medal, Richard Borcherds. Several of our boys go off each year to study Mathematics at university and, since the introduction of the International Baccalaureate Diploma, every boy in the school studies Maths for all seven years. So, it will be a great moment for our boys to be part of the audience for such a great occasion.”

Sir Roger Penrose is internationally renowned for his contributions to mathematical physics, particularly general relativity and cosmology, and famously invented the twistor theory and discovered Penrose tilings. He has received numerous awards including the 1998 Wolf Prize for Physics, which he shared with Stephen Hawking, the De Morgan Medal in 2004 and the Copley Medal in 2008.

The position that Sir Tim Gowers holds at the University of Cambridge enables him to engage in uninterrupted mathematical research for ten years, and he has received awards including the 1996 Prize of the European Mathematical Society and the 1998 Fields Medal, the mathematical equivalent of the Nobel Prize.