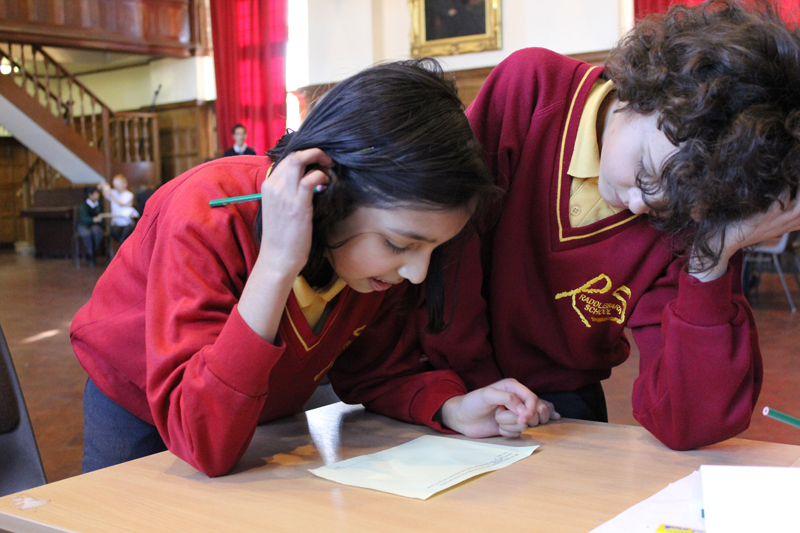 Four boys from King Edward’s School, Birmingham have organised an afternoon of maths challenges for pupils from local primary schools to stretch their abilities whilst having fun.

Teams of Year 6 pupils from 10 state primary schools competed in a range of fun and challenging activities at the Maths Quiz, which took place on Friday, 7 March 2014.

Usman Raja and Alex Pett in Year 10 and Oliver Bealby-Wright and Patrick Wernham in Year 12 at King Edward’s wrote all the questions for the competing primary school children, which included a cross-number and maths relay races.

Oliver Bealby-Wright, said: “We thought it was going to be quite easy to do until one of our maths teachers gave us the questions we’d written to solve. We realised that if we were struggling to answer them that Year 6 wouldn’t be able to, so we had to change them and that took quite a long time.”

Usman Raja, continued: “The children had a huge amount of fun at the science quiz we organised so we wanted to do something similar for the young mathematicians. There aren’t many opportunities for primary school children to take part in these kinds of competitions so we hope that they were able to challenge themselves and have a lot of fun at the same time.”

King Edward’s School has a vibrant outreach programme which the Maths Quiz forms part of. Each year the school runs over 120 masterclasses, engaging with 7,000 primary school children in over 100 schools.

Tom Arbuthnott, Outreach Co-ordinator at King Edward’s School, said: “It’s wonderful to see so many schools taking part in this activity and I hope that their pupils have benefitted from the extra stretch and challenge provided by it. Congratulations to the team from Raddlebarn Primary School who were the overall winners.

“Through sharing our resources, our teachers and our facilities with primary schools, we can help challenge their brightest children and raise their levels of aspiration. Whether or not those children ultimately attend this school as students, we hope it provides them with an opportunity to extend their learning and realise their potential.”