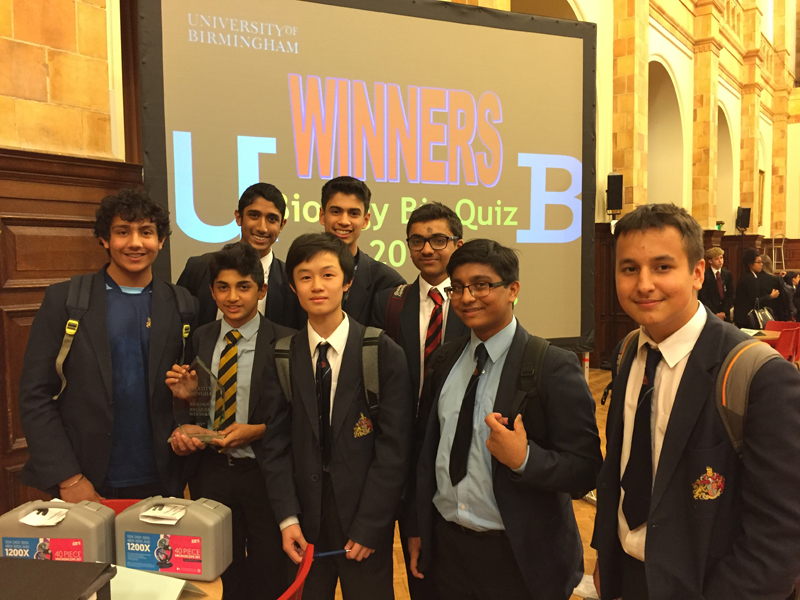 For the third year running, King Edward’s School has won the Biology Big Quiz at the University of Birmingham.

The Biology Big Quiz, which took place on Monday, 26 June 2017 is part of the University’s RAISE (Raising Aspirations in Secondary Education) programme, designed to raise aspirations and break down perceived barriers to higher education.

Over 20 schools from in and around Birmingham took part in this year’s competition with most entering at least two teams. Questions were on subjects ranging from genetics to dinosaurs and many were on topics that the boys have not yet covered in their syllabus.

Not only did King Edward’s win the competition but their second team also picked up a podium position coming runners-up, trailing the School’s winning team by just two points. Both teams fought off competition from schools including King Edward’s Camp Hill, Edgbaston High School for Girls and Bromsgrove School to take the top two spots.

Helen Ferguson, Teacher of Biology, said: “To win the competition three years in a row is a fantastic achievement for the School and I am very proud of all of the boys who have taken part in the competition.

“Both of this year’s teams have done incredibly well, particularly as so many of the questions were on topics they have not yet studied, and we couldn’t have come away with a better result.”