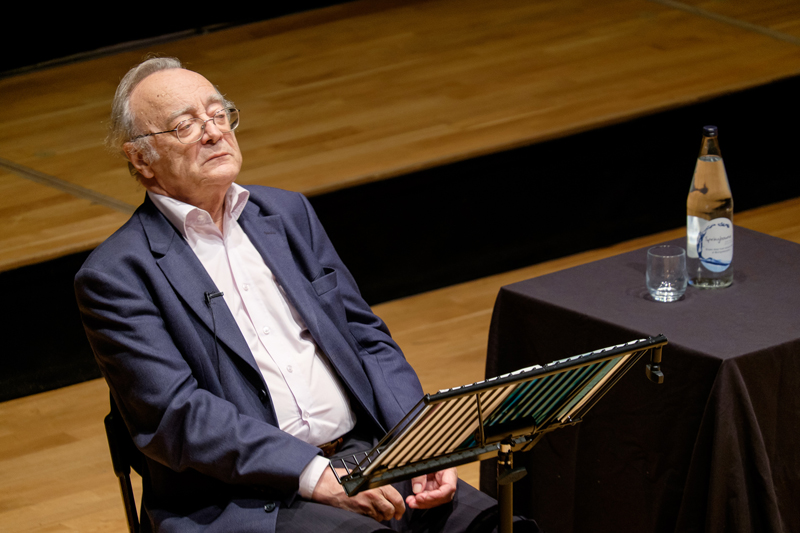 Alfred Brendel, one of the greatest pianists of the last century, visited King Edward’s School to talk to an audience of over 400 pupils, parents, former pupils and staff about the art of playing the piano.

The talk, which took place on Tuesday 22 September in the Ruddock Hall, was the fifth in the Tolkien Lecture series. Other speakers in the series, named after the School’s most famous former pupil, JRR Tolkien, have been Jonathan Coe, Simon Singh, Andrew Graham-Dixon and Professor Garry Sheffield.

Alfred Brendel’s career spanned over 60 years and has seen him perform with the leading orchestras and conductors of the world. He was the first pianist to record all of Beethoven’s piano works and has received many accolades, including the 2010 Gramophone Lifetime Achievement Award.

Brendel’s final concert appearance was with the Vienna Philharmonic Orchestra in 2008, and he now delivers lectures, poetry readings and masterclasses.

John Claughton, Chief Master, said: “It was a rare privilege for all of us to welcome one of the world’s greatest musicians to the school and it was an unforgettable occasion both for those who have listened to Brendel play throughout their lives and for pupils whose musical careers are beginning. He spoke about the nature of music and art with a wisdom born of a lifetime’s dedication.

“This school has a great tradition in music, producing exceptional players through a 90-strong Symphony Orchestra, providing nearly 20 different musical groups and a choir of 150 boys. So, to hear such a man in the beautiful surroundings of the Ruddock Hall was an unforgettable moment for all of us.”