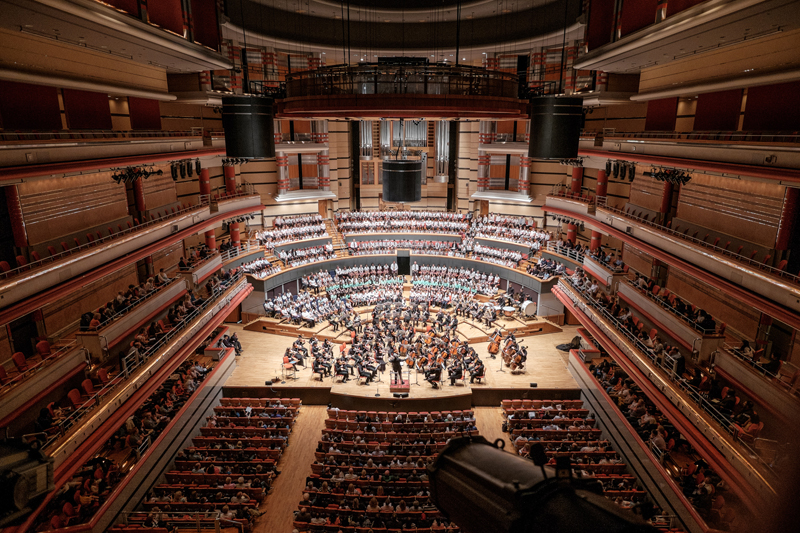 As part of our Outreach Programme, over 600 children from primary schools across the city sang together to raise funds for Birmingham Children’s Hospital.

The children, who are from 16 primary schools, were accompanied by the KES and KEHS Symphony Orchestra in a performance of Romany Wood at Birmingham Symphony Hall on Friday, 24 June 2016.

Romany Wood is a 45-minute musical for children’s voices, narrator and orchestra, and is aimed at introducing classical music to young people. Over 120 rehearsals took place across the city, and for many of the children involved it was their first opportunity to take part in such a large concert.

Martin Leigh, Director of Music at King Edward’s School and leader of the project, said: “The benefit to the primary-age children will be immense. Being part of a choir has social, personal, and academic impacts, as well as the musical benefit. Performing in such a huge project has the potential to raise aspiration, confidence and self-esteem, as well as embed long-lasting memories.

“For our boys, it provided the opportunity to engage with children from a wide range of backgrounds, perform as part of the concert, and gain a working knowledge of how projects like this come together. The legacy of this project will be in the experience, learning and memories of all involved as well as the funds raised by the children for the benefit of Birmingham Children’s Hospital.”

The narrator for Romany Wood was the Chief Master, John Claughton. The concert provided a fitting tribute to John, whose commitment to accessibility over his decade at the school has had a significant impact on both the school and education in the region.

John Claughton, Chief Master, said: “Throughout its history, the purpose of King Edward’s School has been to serve the children of the city of Birmingham and this concert is one of many examples of how the school is doing just that.

“The boys at King Edward’s are very fortunate in all they have here, but we want to make sure that as many children from the region as possible are able to benefit from our experience and resources. However, the concert was a wonderful occasion for all who were involved and I know that our own boys and staff will benefit from the experience as much as the primary school children.

“King Edward’s School’s support for Birmingham Children’s Hospital goes back to the late 1800s and it is a relationship that we are very proud of. It is particularly relevant on this occasion when so many of the children involved in the concert will have had contact with the hospital in one way or another and some will no doubt go on to become part of the Hospital workforce in the future.”

The project has been jointly funded by the Schools of King Edward VI and King Edward’s School to enable all of the money raised from the concert to go to Birmingham Children’s Hospital.