The weather in the past week was colder and wetter than previous weeks, but this did not affect the rate at which birds were coming to the feeders. Many people will have seen adult birds feeding their young.

Some of the sightings this week are: 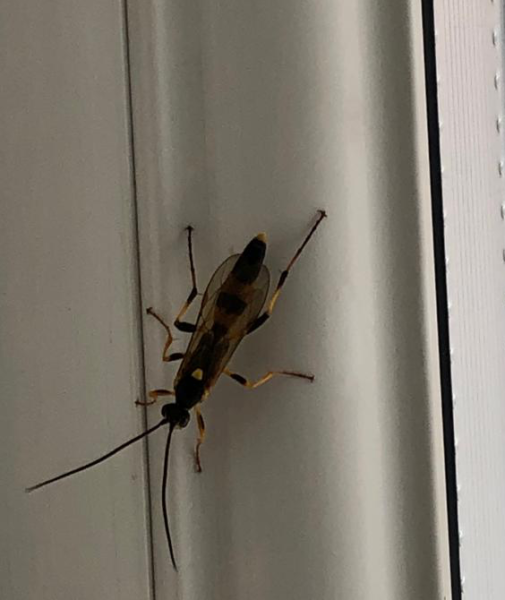 As I seem to be getting a weekly insect in my kitchen, I thought I would put this Yellow-Legged Mud Dauber Wasp on here this week. I find it very interesting that I have such a wide variety of bugs in my house.

Mr Porter has been getting some brilliant views of this spectacular Spotted Flycatcher. These birds are not common at all and Mr Porter is very fortunate to have some in his area.

This week, Mrs Linehan told us the birds that have caused her the most angst and the three which gave her the most pleasure.

The birds that caused her the most angst were the ducks – “I have nothing against ducks per se, but these ducks sleep on the lawn and then wake up very early to plan their day at full volume – which means everyone else wakes up too.”

The three birds that gave her the most pleasure were:

“Blue tits – they are aerodynamic feathery balls of acrobatic genius! It’s always amazing to watch them land on the slightest, lightest twig, barely bending it before they flip away to another one.

Jackdaws – their cheerful mob mentality as they swagger round the garden, not fazed at all by the squirrels, the magpies or the tailless pheasant. They’re like Fagin’s gang of thieves, stealing a crumb here and a remnant of cake there…”