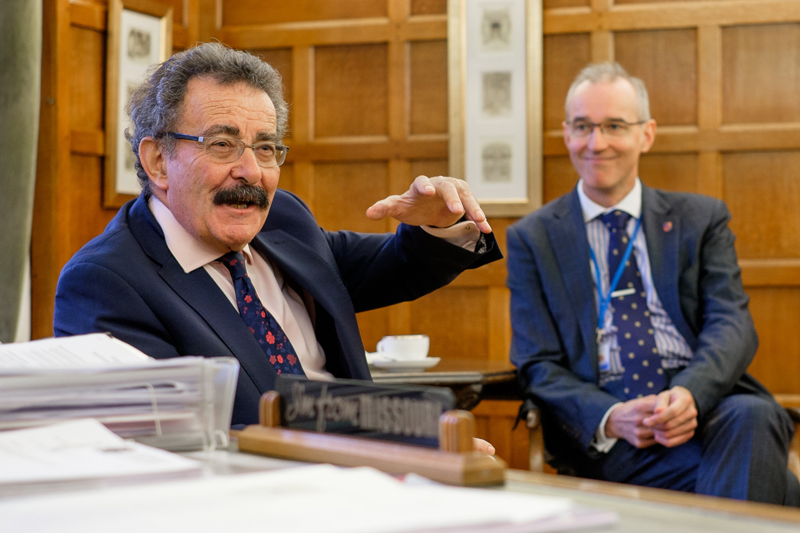 Professor Lord Robert Winston, renowned scientist and Britain’s leading fertility expert, visited King Edward’s School to talk to an audience of over 400 pupils, parents, former pupils and staff about the importance of being scientifically literate.

The talk, which took place on Thursday 2 March in the Ruddock Hall of the School’s Performing Arts Centre, was the seventh in the Tolkien Lecture series. Other speakers in the series, named after the School’s most famous former pupil, JRR Tolkien, have included Jonathan Coe, Sir Hew Strachan, Simon Singh and Alfred Brendel.

Lord Winston, Professor of Science and Society and Emeritus Professor of Fertility Studies at Imperial College London, who pioneered techniques to improve fertility treatments, is passionate about communicating the importance of science to all age groups. The Bafta-winning broadcaster and author of over 20 books enthralled a packed auditorium with his thought-provoking lecture called ‘Why bother with science?’

Dr Mark Fenton, Chief Master, said: “It has been an incredible privilege for us to welcome such a distinguished scientist to the school. Not only did the boys find it a great inspiration, but listening to Lord Winston was hugely enlightening and enjoyable for all who attended.

“King Edward’s School has a great scientific history, counting two Nobel Prize winners in its alumni, and it is a tradition which continues, with 26 pupils going to read medicine alone last year. As an IB school, all of our boys continue to study science for two years in the Sixth Form, so hearing Lord Winston speak so emphatically about the importance of science resonates wholeheartedly with the philosophy of the school and its decision to move to the IB Diploma.”