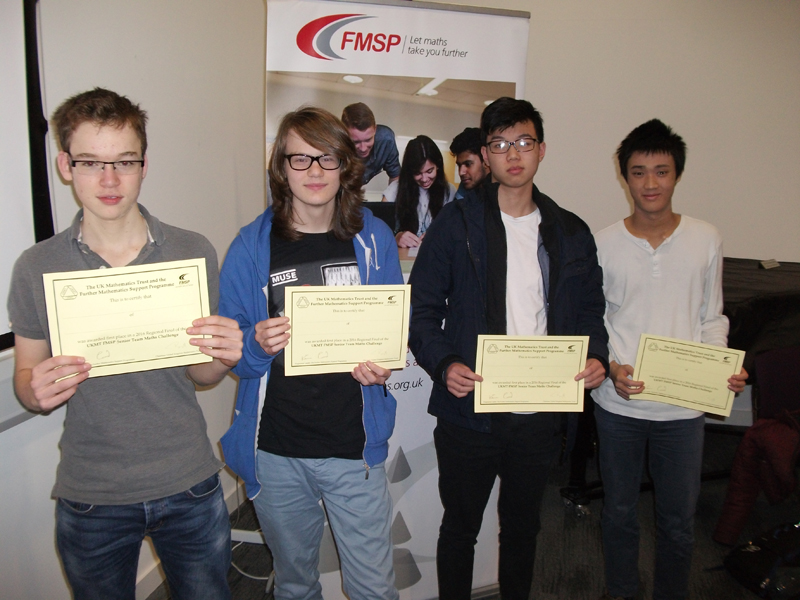 King Edward’s School is through to the National Final of the Senior Team Maths Challenge after achieving a perfect score in the regional stage of the competition.

Over 1,000 school teams from across the UK take part in the annual competition which tests pupils’ mathematical knowledge through a series of challenges. In the Midlands Regional Final held at The Riverway Centre in Stafford on Monday, 28 November 2016, King Edward’s School secured a place in the National Final with a perfect score of 177/177.

Tim Cross, maths teacher and coach of the team, said: “I am extremely proud of these four boys who have enabled King Edward’s School to win the Regional Final with a perfect score once again. We are now looking forward to the Nationals to see if we can win the competition for a third successive year.”

The winning team of Daniel Yue and Dougie Dolleymore in Year 12, who also competed in and won the competition last year, and Bill Xuan (c) and Toby Jowitt in Year 13 will compete in the National Final at the Royal Horticultural Halls in London on Tuesday, 7 February 2017.

The Senior Maths Challenge is jointly organised by the United Kingdom Mathematics Trust and the Further Mathematics Support Programme and is sponsored by Rolls-Royce plc.