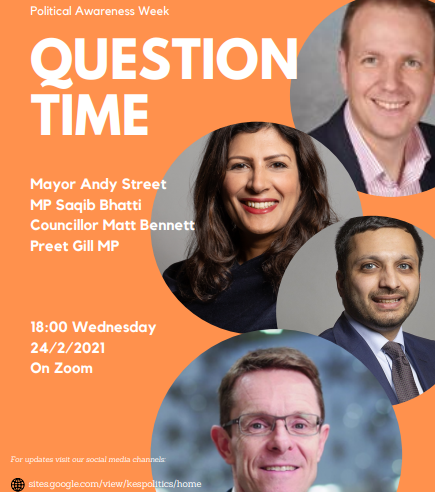 Political Awareness Week was a student-led initiative that had the sole purpose of educating people about what politics is and why it’s important while also encouraging people to be actively engaged in politics.

The idea first started when Advait Kuravi, the lead of the initiative, decided to conduct an independent study of how much people actually know about politics. Having obtained alarming results about people’s knowledge about politics, Advait decided to take responsibility upon himself to educate and encourage teenagers to be more involved in politics. He consulted Dr Otero-Knott with the idea of Political Awareness Week, one that would actively engage everyone and address the key themes and ideas. Not only this, but Dr Otero-Knott proposed the idea of not only educating KES, but educating a wide range of schools, making this a larger project than we had initially intended. This would be achieved through a series of talks from external speakers and a series of activities for each year group while allowing students to join from a range of schools, such as KES, KEHS and KEVI Handsworth.

After gaining approval of the idea, Advait would assemble a team of students that shared the same passion for politics. This team consisted of Advait Kuravi, Jacob Hiles, James Corcoran, Jamie Gatcha, Prathamesh Paruvatharaj, Rahul Ghosh, Varun Mohan and Will Thomas. This team would go on to meet every lunchtime without fail and discuss the event and how it would run. The team would assign each other deadlines to complete tasks to ensure no detail was left undiscussed and everything was done perfectly. It really was a great way to work towards making the event as great as it could be and working as hard as we could to achieve the end goal we all had in mind.

However, the team faced a massive hiccup in the organisation process. The UK introduced a lockdown due to the Covid-19 pandemic whereby the team could not meet in person and had to shift everything online, which made it extremely hard to share ideas and discuss the event. Everyone in the team had to show an incredible amount of dedication and perseverance to continue the initiative. The team adapted incredibly well with weekly meetings in school becoming weekly meetings over Zoom, whereby everyone had to wake up early and attend every week showing the passion the team shared.

After hours of thinking and document making, with the help of teachers during the week, no detail was left untouched and the event was a massive success. Throughout the week, many people were engaged during the lunchtime activities and also attended the talks over Zoom, ensuring we met our original goal of educating as many people as possible about politics. Every setback the team faced had been successfully overcome, which led to a great success.

We can now make the event a greater success by remaining engaged in politics and making sure that everyone continues to be involved in politics!