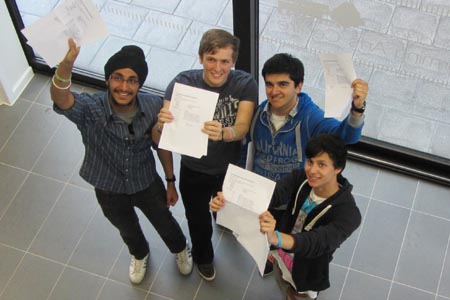 Boys from King Edward’s School are celebrating after receiving another excellent year of GCSE results following the success of the first set of IB Diploma results in July.

Out of a year group of 115 taking their GCSEs, 21 boys achieved 10 A*s and a further 13 boys obtained 9 A*s. 57.4% of entries resulted in A* grades, 84% in A*/A grades, and 96% in A*/A/B grades. In the core subjects of Maths and English, 70% of candidates achieved an A* and in the rigorous science subjects 60% achieved an A*. King Edward’s School studies IGCSE, not GCSE, in English, Maths, science, modern languages and music, believing it to more rigorous than GCSE and a better preparation for the International Baccalaureate Diploma.

The first Sixth Form to take the International Baccalaureate (IB) Diploma achieved outstanding results. The maximum score of 45 points was gained by three boys, Ravin Jain, Andrew Macarthur and Jimi Oluwole, a score achieved by only 109 students worldwide out of 119,000 that took the IB Diploma in 2012. A further seven boys dropped only one mark to achieve 44 points, and one third of the cohort attained scores of 40 points or above, higher than the equivalent of four A*s at A-level.