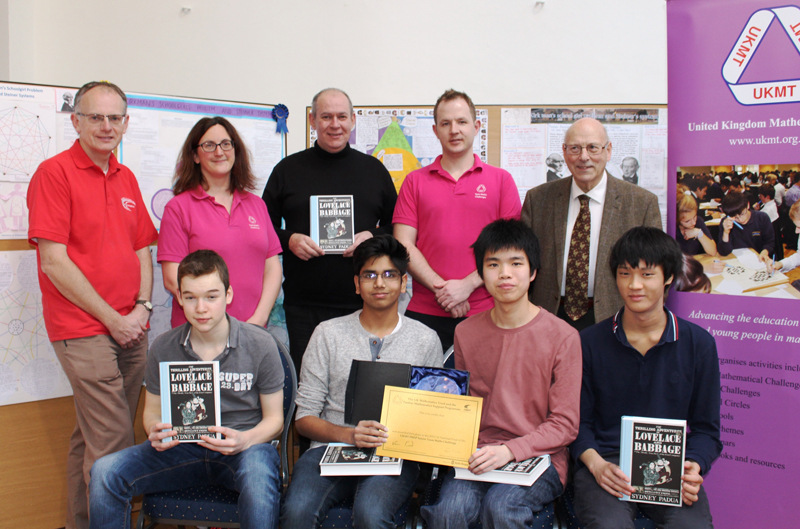 For the second year running a team of four boys from King Edward’s School, Birmingham has jointly won the National Final of the Senior Team Maths Challenge with a perfect score.

Over 1,000 school teams from across the UK took part in the competition and 86 went through to the National Finals, which were held at the Royal Horticultural Halls in London on Tuesday, 2 February 2016.

The team of Jeremy Ho and Vidy Reddy in Year 13, who also competed in and won the competition last year, and Daniel Yue and Dougie Dolleymore in Year 11 scored full marks to win the competition jointly with two other teams, from Ruthin School and Westminster School.

Tim Cross, Maths Teacher and coach of the team, said: “To win the National Finals of this competition with a perfect score last year was a fantastic accomplishment. To repeat that success this year and win the competition by answering every question correctly again is truly remarkable. I am immensely proud of these four boys.”

John Claughton, Chief Master, said: “It would take a fine mathematician to calculate the odds of winning a competition with a thousand entrants in successive years. I suppose this must mean that the school really does have the best mathematicians in the country.

“Jeremy and Vidy were in the team that won last year and Daniel and Dougie have also been successful in the Junior Team Maths Challenge. All four of these boys are exceptional mathematicians and they have thoroughly enjoyed preparing for the competition and competing. Jeremy has an offer from Cambridge and Vidy has one from Oxford and Daniel and Dougie will be just as good – perhaps better.

“The school has a great mathematical tradition and our most famous mathematician is Richard Borcherds, who won the Fields Medal, the mathematical equivalent of the Nobel Prize. These boys are heirs to that tradition and they show the great talent and potential there is in the boys of this school and this city.

“It’s been a time of great achievement for the school since less than a fortnight ago we received 27 offers from Oxford and Cambridge and last term we were chosen as The Sunday Times’ IB School of the Year.”

The Senior Team Maths Challenge is a national competition jointly organised by the United Kingdom Mathematics Trust and the Further Maths Support Programme and sponsored by Rolls-Royce plc. Over 1,000 school teams from across the UK compete in a number of maths challenges against the clock at regional rounds with the top 80 to 90 teams progressing to the National Finals.