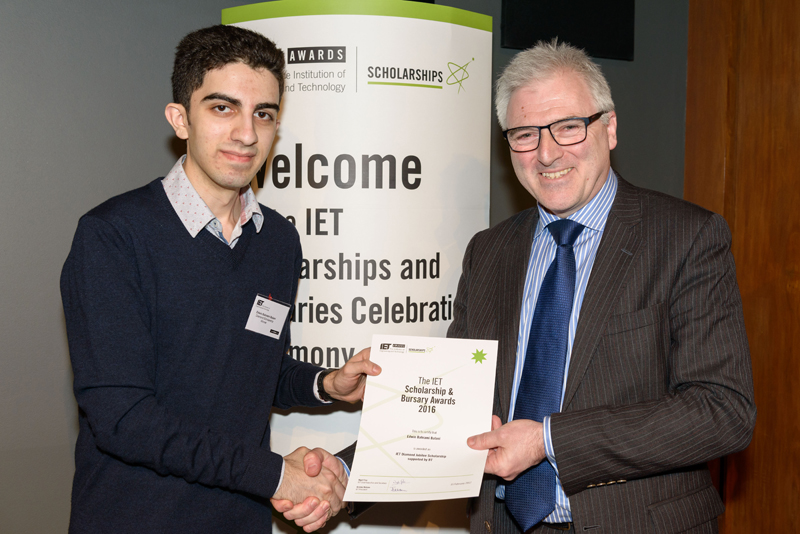 A former pupil of King Edward’s School has been awarded a Diamond Jubilee Scholarship by the Institution of Engineering and Technology (IET).

Edwin Bahrami Balani, class of 2016, was one of 100 pupils nationwide to be awarded an IET Scholarship last year. The Scholarship, sponsored by BT, will allow Edwin to benefit from funding, mentoring and free membership of the IET throughout his engineering studies at Magdalene College, Cambridge.

Edwin was awarded the Scholarship following a rigorous application process, which assessed his academic achievements and motivation to work in the engineering field. Criteria also included gaining over 36 points in the International Baccalaureate (IB) Diploma and enrolment onto an IET accredited engineering degree.

The Scholarship was formally recognised at the 2017 Scholarships and Bursaries Celebration Ceremony which took place on Wednesday, 15 February 2017 at IET Savoy Place, London. On the night, Edwin was presented with a certificate from his donor Dr Tim Whitley, Managing Director of Research and Innovation at BT.

On receiving the Scholarship, Edwin said: “I am incredibly grateful and honoured to have been awarded the Diamond Jubilee Scholarship. Not only will it take away some of the financial pressures of being an undergraduate but the access to mentorship and other opportunities will be invaluable.”

This is the second scholarship that Edwin has received in recognition of his potential as a future engineer. In 2014, Edwin received an Arkwright Engineering Scholarship, which provided an annual financial award and a range of enrichment activities to support him through his Sixth Form studies.

The Diamond Jubilee Scholarships are named in honour of the IET’s patron, Her Majesty The Queen, and aim to address the Science, Technology, Engineering and Maths (STEM) skills shortage in the UK.