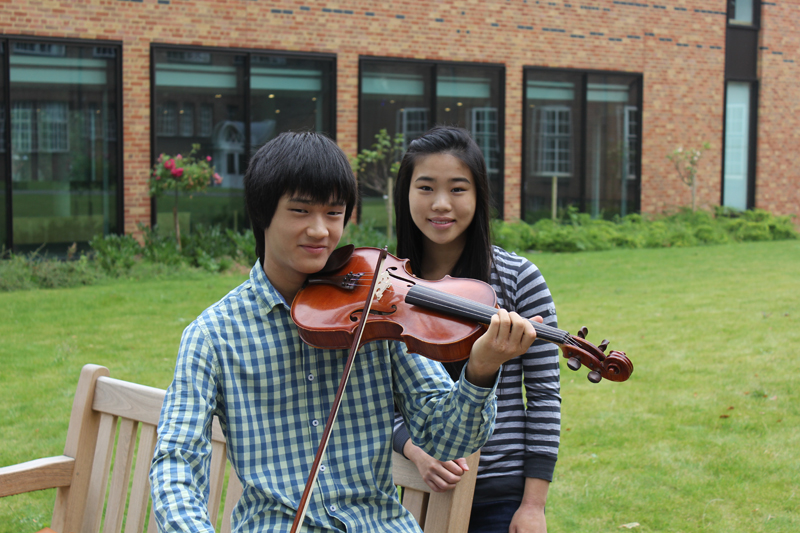 A talented pair of musical siblings have hit all the right notes in their GCSE and A-level results.

Today Daniel Yue, an exceptional violinist from King Edward’s School, Birmingham, achieved 10 A*s in his GCSE results and an additional A* with distinction in Further Maths, in which he also achieved full marks and a national top candidate award.

Daniel’s results come just a week after his sister Adelaide, an accomplished pianist from King Edward VI High School for Girls, achieved 4 A*s in her A-level results and secured her place to read Medicine at Corpus Christi College, Cambridge.

The duo have combined their musical passion with their studies to great success. Daniel is the leader of the schools’ joint Symphony Orchestra and also performs as part of a piano trio and Chamber Orchestra, while Adelaide has won numerous prizes at top music competitions and reached the final stages of the BBC Young Musician of the Year.

On receiving his results, 16-year-old Daniel from Dorridge, said: “I’m thrilled, I wasn’t expecting it but it’s a pleasant surprise. I’m very glad about Maths because Maths is my favourite subject, so it’s good news!”

These results add to Daniel’s previous success in Maths competitions as he was part of a team of four boys who won the National Senior Team Maths Challenge in February this year, beating over 1,000 teams from across the UK in the process. Daniel hopes to continue with his love of Maths at university, once he has completed his IB Diploma that he will begin in September.

This year’s GCSE results across both schools have been excellent. At King Edward’s School, out of a year group of 123, 26 boys achieved 10 A*s, a further 16 achieved 9 A*s and 72 boys achieved only A*s and As. Overall, the percentage of A* grades attained was 61% and 87% A*/A. This follows outstanding International Baccalaureate Diploma results: an average score of 39.2 points, 54% of the cohort attaining scores of 40 points or above (40 points is the equivalent of more than four A*s at A-level) and over 90% of boys gaining places at their first choice university.

Dr Mark Fenton, Chief Master of King Edward’s School, said: “On just my second day in the job, I have been almost as excited as the boys about receiving the school’s GCSE results! I am happy to say that the boys have done splendidly well, with close to 90% of the grades being A*/A. There will be a lot of very proud King Edward’s School parents across the city today.”

Principal, Ann Clark, said: “I am delighted with these outstanding results which are a tribute to the girls’ hard work and the dedication of the staff. Their families will be so proud of them.”