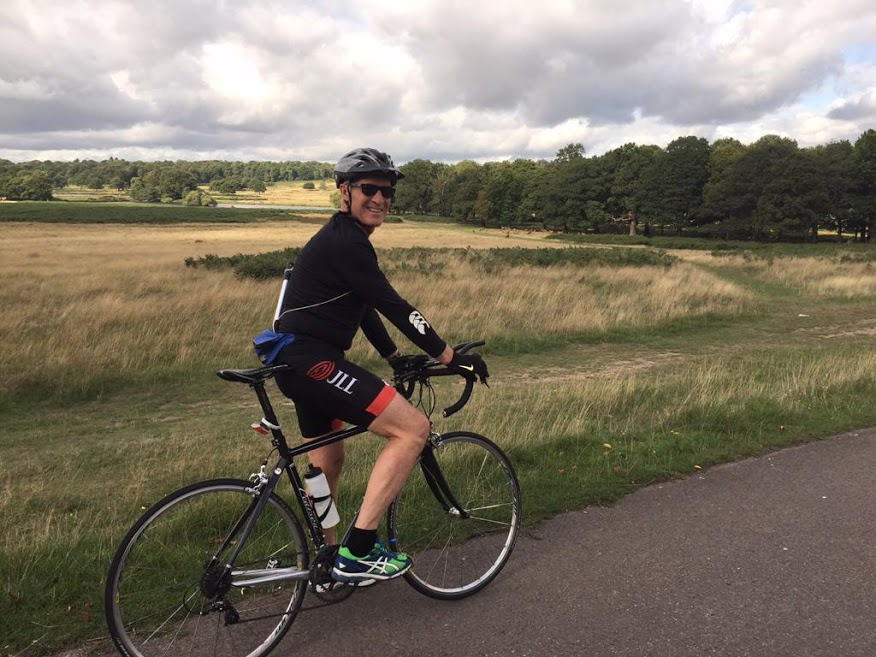 Wherever possible, use lockdown to get ready to safely walk or cycle to school from this September.

So, this is my Dad at 70 – a model of Sustainable Wellbeing.

Aged 60, when his peers were growing tummies and buying sports cars, he decided to literally out-run Type 2 Diabetes by joining his local 5k Parkrun. He also treated himself to a made-to-measure road bike which feels like the wind is always behind you. When he’s not running and cycling, or walking with my Mum, or rolling around on the floor with his grandchildren, he’s growing his own vegetables. The world is his gym. The journey is his work out. Growing his own food is his warm down. This is Sustainable Wellbeing.

Compare this to a version of me: I get in my newly-factoried two tonne optimistically named Land Rover ‘Discovery Sport’, which tells everyone how much money I’m making; I drive five trafficky miles to an overly air-conditioned £40 a month gym; I run nowhere on the powered treadmill with a fan in my face to simulate wind whilst watching other people do aerobics on the TV; I have a hot jacuzzi, rehydrate with a bottle of French Evian that’s one thousand times more expensive than my own clean fluoridated tap water gravity-fed from the Welsh valleys, drive home again via a McD’s cow quarter-pounder to binge so late on Netflix and cheese that I sleep poorly, wake angry and guiltily hit the gym again the next day. Carbon footprint per calorie burnt? Who knows? Who cares? – This is neither being well, nor sustainable.

So, I interviewed Rem D to get the low-down on how they combine exercise with their commute for Sustainable Wellbeing. In a group of 25 Year 8 KES pupils, six of them often walk or cycle to school, and feel better for it. That means a quarter of Rem D are exercising whilst they commute, and loving it – a great example of Sustainable Wellbeing.

But what about the others?

Here are the headlines for all 25 pupils:

Mean distance driven to school by those in cars: 4 miles

How about more generally – are they living a sustainable lifestyle?

Well, they have a mean annual carbon footprint of 12.7 tonnes of CO2, which is 25% more than the average adult in the UK, and about 10 tonnes more than the average adult globally. The lowest was 7.8 tonnes of CO2 (a regular walker to school), the highest (a car passenger) was over 20, mainly because of the two medium-haul return plane trips he’d taken that year – one on a school trip.

So, is there a correlation between the sustainability of their whole lifestyle and their commuting choices?

The data set is too small to say. Anecdotally, it seems to be those who walk and cycle who are most aware of the most lethal problems caused by cars – particulate matter from exhausts and tyre decomposition that is too small for car filters to filter out, even for their own passengers, and which enter the bloodstream and contributed to the 900 deaths in Birmingham last year from man-made emissions. Being driven by car seems to make us less road-savvy to the dangers to ourselves and others.

Although our pupils’ general footprints were all outrageously large in global and national terms, more than half of them have weaned themselves off car-dependency and are travelling to school sustainably, some in a way which contributes to their wellbeing enormously.

I interviewed four colleagues who live within four miles of school – OZ, AJP, EJA and AWP – about their experiences of sustainable travelling to school.

How many miles is your commute to school?

AJP: 4 miles directly but I avoid the main road on the way home as the pollution can be bad by the afternoon. So, 5 miles home through Bournville. But sometimes I cycle along the canal and river: it’s nearly 7 miles, but is flatter and has no traffic lights so only takes 5 minutes longer.

Out of 175 school days a year, how often do you reckon you cycle?

AJP: Two years ago it was probably 120. Last year more like 40 to 50 as I was using the car to drop my son at nursery quite a lot.

AWP: I don’t cycle! I am awful on a bike. It’s far safer for the rest of Birmingham if I stay on the pavements running.

How often do you reckon you walk or run?

AWP: Before having children I would say I ran in or walked in about 50% of the time. The biggest challenges are getting her into nursery and arriving at work in time to get jobs done. The weather with a very little one can also discourage us. I used to enjoy the run in from our old flat on the Hagley Road and also enjoy walking in whilst listening to a podcast from where I currently live. I would say I only walk in about 20% of the time now, which is going to change with the KES Commute Challenge!

How often do you use public transport to get to school?

AJP: Once or twice a week

How often do you drive to school?

AJP: Hoping for once a week now my son is in school.

What do you love about walking, running or cycling?

OZ: Feels healthy, better for the environment, moment of not thinking, not worrying about things.

AJP: I like the mental separation it gives you between work and home that driving doesn’t seem to. Also in Birmingham there are so many paths that are away from roads you can often find a route through a park or along a canal. We have two children and I struggle to find time for enough exercise in the week if I don’t build it into the commute.

AWP: I really enjoy the walk into work because it forces me to clear my head. If I am at home or work then I always feel I should be doing something useful! When I am walking and listening to some music or a podcast I am truly relaxed. Running in the morning also has that effect, but has the additional benefit of giving me an energy boost for the remainder of the day. I would say that whether it be running or walking I am in a much better frame of mind when I enter work if I have left the car at home.

What do you hate about cycling or running in?

OZ: A faff – more to think about – clothes, trousers and top. Sweat.

AJP: When you get a puncture. Not being able to do it when the roads are too icy.

EJA: Having to weave in and out of traffic when it is particularly busy.

AWP: Planning ahead! My wife and I need to coordinate the drop off and pick up of our daughter, which is complicated if I walk. What to do with the pushchair? What if it rains? Do either of us have meetings? These aren’t really insurmountable difficulties and I intend to plan a more environmentally friendly commute from September.

What do you love and hate about driving?

AJP: Driving is easy but I hate that my average speed in the car is probably less than the bike in the mornings with all the traffic. It feels like a waste of petrol.

EJA: I hate sitting in traffic and not knowing how long it will take to get to school. I did like listening to the radio when I drove in though and miss that a little bit.

AWP: I hate sitting in traffic! I always consider the car to be the quickest means of getting from A to B, which it is (just about), but due to the traffic I am only saving myself about 15-20 minutes when compared to walking. When I consider the benefits carefully I realise that a longer, enjoyable walk is more important than getting to the nursery 15 minutes earlier.

Any goals you have for your own commute next year?

AWP: I want to get to the point that a walk or run is the norm and the car is only used in particularly tricky circumstances. I have worked on my fitness during lockdown with the intention of running to work more often.

What could we do as a school to make your goals more achievable?

AJP: I think the facilities and support for teachers to commute by bike are definitely in place already. If more people are going to ride we might need a bigger bike shed.

EJA: The bike sheds could probably do with a refurb.

AWP: Start the school day an hour later! I think I have all I need to achieve my goals.

Anything else to say to pupils and colleagues who are considering not driving for the first time?

OZ: Leave your deodorant at school, and things to make you fresh for the day – mini towel, a commute kit. Plan days for taking books home.

AJP: Even if it takes a bit longer it has other benefits. Get some good waterproofs.

EJA: Give it a go. I thought it would be unmanageable trying to cart sports kit and books back and forth. And that it wasn’t worth getting my bike out of the shed for such a short journey. However I did it for one of the KES environment days where they tried to get everyone to not drive for a day and realised how easy it was to do. All the little difficulties I thought there would be turned out to not be difficult at all. 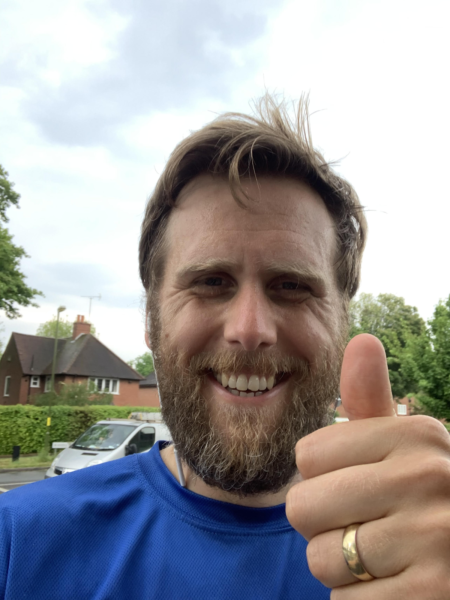 Two years ago this week, the BBC Political Editor for the Midlands, also Chair of Governors of the 11 Schools of King Edward VI in Birmingham, Patrick Burns, reported on the lethal pollution levels in Birmingham. Since then, the numbers of staff and pupils commuting by car to KES has not reduced. Why not? Covid has now killed 1,144 people in the West Midlands, and we have taken the most drastic measures, personally and as a school, to minimise these casualties. Birmingham City Council has just published their post-lockdown emergency transport plan including funding for more cycle-friendly routes. What could we at KES be doing to reduce the 900 a year in Birmingham whose lives will be shortened by our car-dependency?

We have eight weeks of a summer filled with running and cycling to prepare to build back better.

If you need advice or encouragement about how to get started travelling more sustainably to school, ask any of those listed here, or anyone at KES. The school transport guidance is here.