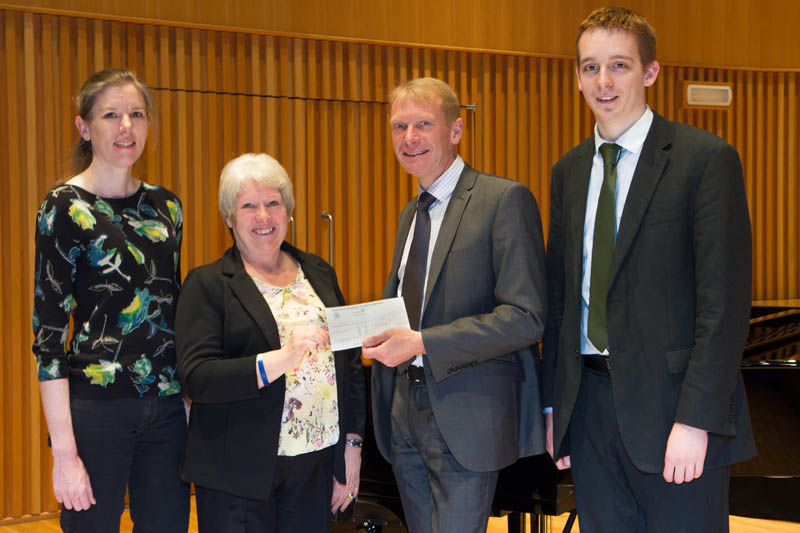 A group of young musicians from King Edward’s School and King Edward VI High School for Girls has raised almost £900 for a homeless project through holding a charity concert.

The Choral Society and Senior Swing Band from the schools held a concert on Tuesday, 24 March 2015 in aid of the South Birmingham Young Homeless Project.

Through ticket sales the pupils raised £863 for the Longbridge-based charity which provides support and advice on housing, benefits, debt and health to young homeless people between the ages of 16 and 24. A further sizeable donation was made directly to the charity from an alumnus of King Edward’s School who was not able to attend the concert.

On Thursday, 14 May 2015 Roberta Bassett, Project Administrator for the charity, collected the funds raised from Martin Monks, conductor of Choral Society, and Tom Jarvis, director of Senior Swing Band, who had jointly organised the concert.

On receiving the funds, Roberta said: “We’re very grateful to the pupils and staff of the King Edward’s schools for their support. These funds will help a lot of young service users that use the project in practical ways such as purchasing travel passes, emergency food parcels, replacement birth certificates and key deposits.”

Martin Monks, music teacher and conductor of Choral Society, said: “The charity is one that the pupils chose and that they became very passionate about. Giving something back to the community is central to the ethos of both schools and it’s fantastic that so much has been raised for such a worthwhile cause.”