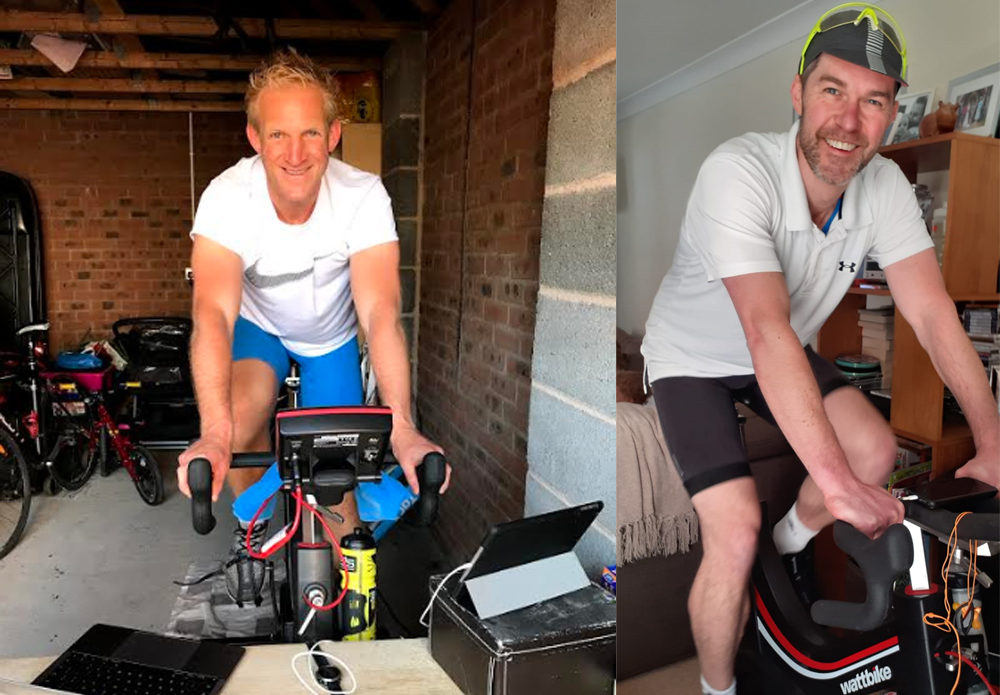 Two King Edward’s School teachers have completed a 24-hour static bike ride, raising over £2,200 for NHS Charities Together to support NHS and frontline workers involved in the fight against COVID-19.

Director of Rugby and Head of Sport Science, Mr Browning, and Teacher of Geography and Head of Heath House, Mr Fair, cycled 756km between them from their respective homes in alternating two-hour shifts. Starting at 4pm on Friday 24 April, the pair pedalled through the night before completing their challenge at 4pm on Saturday 25 April.

The challenge was the brainchild of former Olympic athlete James Fair, who said: “I was thinking of a way that we could raise morale in the community and thought there is nothing that pupils like more than watching their teachers suffer! It’s also a great way to raise funds for some great causes at a difficult time.

“The motivation of doing a challenge with someone is key, as the thought of letting that person down by stopping is pretty tough to explain. As soon as the clock started there was no other choice apart from completing it, although I had to pick up my pace a little for the last spell so we could get 750km done.”

Mr Browning, who is no stranger to a fundraising challenge, with races such as the Marathon des Sables under his belt, said: “When Mr Fair asked me to take part, it was a very straightforward decision as I hope it will raise awareness of one small way in which we can help our frontline services during the challenges they face at this difficult time.

“It was tough physically but even more difficult mentally. Alone in your garage is quite a lonely place. The ‘normal’ motivation of a journey wasn’t there for me so it was more a question of being motivated by the stats and, as ever, by the thought of telling people you had to give up!

“My daughter had painted a rainbow with ‘NHS’ under it on the driveway which I stared at for the whole time. Our 24 hours of discomfort is nothing compared to what our frontline staff are doing for weeks at a time.”

NHS Charities Together is an umbrella organisation, which supports more than 140 official NHS charities across the UK. Collectively, these charities give £1m every day to the NHS, providing vital funds to help the NHS do more. The pair have reached their target but donations to NHS Charities Together can still be made via JustGiving.